11B match report against DPHS

We knew this match was going to be tough because this DPHS team had won against Bishops and Wynberg comfortably earlier in the week.

We won the toss and chose to kick off. We played in our half for a long time due to a kick by their fly-half over the heads of our backline early in the game. We re-grouped and it was not long before we scored. The contest was pretty even for the half and just before half time they scored. The half time score was 5 – 5.

At half time our coaches said we must kick for touch if we were awarded a penalty. We were now playing with the wind so this made sense.

A penalty was awarded to us and we chose to kick out. Our forwards were doing well in the line outs so we knew we would win possession. Eventually we were rewarded with try no 2 by Josh Lane which was successfully converted. Fortunately for us their fly-half missed his touch kicks a few times which were superbly caught by our fullback who made good ground with ball in hand. Just before full time Mathew Hay scored try no 3 which was also converted. 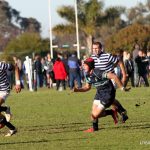