SACS SAVE THE BEST FOR LAST

The South African College High School (SACS) hosted archrivals Wynberg Boy’s High in a FNB Classic Clash. It was a magnificent winters morning when the teams took the field and an appreciative crowd watch SACS win their last match of the term, 20-6 (halftime 7-3).

The match was televised live on Supersport and was massively important match for both teams who have endured challenging seasons thus far. Both teams are supremely committed and well coached and have played good rugby at times this term but given the difficult nature of the Western Province schools league they have little to show for their efforts. 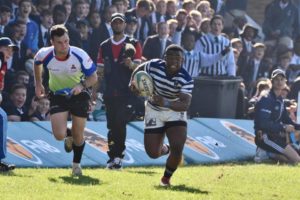 On the day, Wynberg started the better of the two teams and following an intercept and some sustained pressure they converted a penalty on eight minutes to take the lead. The teams traded blows for the first twenty minutes until a contestable kick was retrieved by the hosts. Hooker Hlumelo Ntweni offloading to his skipper Jordan Thomas who almost scored in the corner.

The final fifteen minutes of the half were all SACS. Centre Rihaz Fredericks came close to scoring twice while a massive overlap was spurned on the left. It was beginning to look like all the pressure may amount to nothing when Wynberg cleared their lines.  The ball was fielded by SACS fullback Duran Koevort who sparked a brilliant counter-attack, which resulted in a try for flank Ian Paterson. Flyhalf Nicholas Haasbroek convtered.

SACS butchered the kick-off receipt and gave Wynberg a chance to attack with one minute left of the half. Wynberg came close to scoring following a maul and a series of drives by their forwards but had to settle for a penalty. Unfortunately for them the relatively easy attempt was missed leaving SACS with a slender 7-3 half-time lead.

Straight after half-time SACS extended their lead thanks to a scrum penalty. SACS conceded two penalties themselves soon after, which allowed Wynberg to get onto the attack. After their maul was sacked Wynberg went wide to the left and massive wing Ebenezer Tshimanga almost went over in the corner. Wynberg continued to exert pressure and eventually managed to kick a penalty on eight minutes to narrow the hosts lead to 10-6. 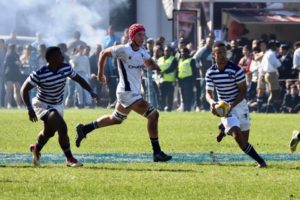 The four-point deficit was short lived though as SACS stuck a vital blow two minutes later. Haasbroek threading through a neat grubber for left-wing Thomas Doyle to score. Haasbroek kicked the conversion and SACS had a healthy lead. More importantly though a visible sense of confidence appeared to course through their collective veins.

Wynberg were never going to give up without a fight and they capitalised on some lateral attack by SACS to secure a vital turnover. Wynberg launched a brilliant attack on twenty-minutes but unfortunately when within metres of the SACS line they got pinged for side-entry at a ruck. It appeared to be a crucial moment but when Haasbroek missed touch Wynberg came storming back again in the form in Tshimanga. Again a knock-on at a key moment cost them the opportunity to score.

Wynberg were still on the attack though and the size and weight of hooker Kamva Mgwali and prop Phillip Masango was beginning to tell on the SACS defence. SACS held firm though in what was a crucial passage of play.

When SACS did eventually escape their half they executed a lineout play that has worked well for them all season. Lock Enos Ndiao popping the ball to flank Nick Boden who burst through the Wynberg midfield defence. Boden was tackled just short of the line but a few phases later SACS were awarded a penalty, which Haasbroek duly converted.

SACS received the kick-off and wound down the clock to secure an important and memorable win. Their supported flooding onto the field to celebrate a first Southern Suburbs derby win of the season!