The South African College High School (SACS) were able to put their humiliating defeat of last week behind them and hold on for a 13-12 (halftime 8-7) win against rivals Rondebosch Boys’ High School. The match was played at SACS in bright sunshine but with a chilly south-easter blowing down the field.

Both teams have had forgettable seasons thus far and were desperately in need of a win to lift spirits with many more big games on the horizon. Although both teams are out of form they tried to play positively. While the quality of rugby was for the most part fairly average at least the boys showed intent to play with ball in hand. 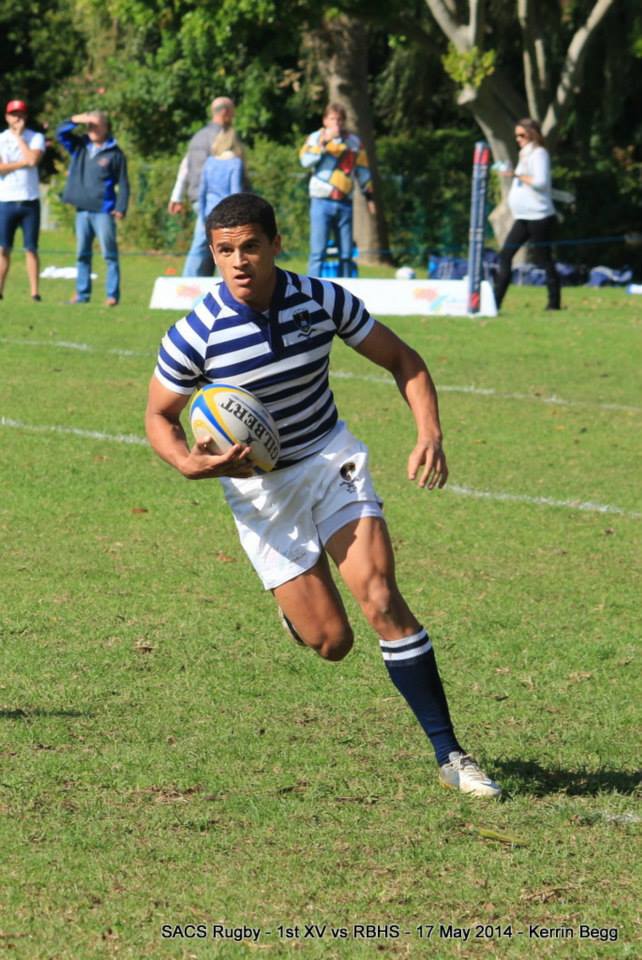 Rondebosch started the better of the two teams and produced some good passages of play but it was SACS who were first on the scoreboard in the 20th minute via a penalty from fullback Lecander Salies. Four minutes later SACS attempted to start a counter-attack but their passing was laboured and livewire Rondebosch flank and captain Robbie Waddilove picked off a pass, intercepted and scored under the posts. Wing Rory Thomson converted to give the visitors a 7-3 lead.

SACS took the lead again in the 32nd minute when after a period of sustained attack Salies went over in the left corner. He was unable to convert his own try.

With the wind at their backs Bosch kicked more for territory in the second half. Like Rondebosch in the first half SACS were forced to run from deep. Twice they created good opportunities only for the last pass to go awry. Good hands though up the right from a turnover on the halfway line saw right-wing Damian Rawstorne placed in the clear. He did well to finish but Salies crucially could not convert leaving Rondebosch within once score range.

Bosch brought on a few fresh substitutes in the last quarter and that added pace and intensity to their game. They tested SACS using the width of the field and eventually fullback Kyle Ballakistan broke though and scored. Thomson failed to convert and it was back to a one point game.

Rondebosch finished the stronger of the two teams and with eight minutes to go Thomson had a relatively straightforward penalty kick to put Bosch in the lead. He missed to the right but unforgivably the SACS flyhalf kicked the 22m dropout directly into touch. Bosch had a midfield scrum from which they launched a sustained period of attack for the final seven minutes.

They attacked in waves and SACS were forced to defend multiple phases as play shifted across the field and back again on numerous occasions. SACS showed great spirit in defending their line and eventually a forward pass was spotted by referee Marc van Zyl who blew the final whistle to end a pulsating contest.