The South African College High School (SACS) played host to Diocesan College (Bishops) on a cold and rainy morning in Newlands. Despite the conditions the oldest schools derby in South Africa lived up to expectations as a desperate Bishops team threw everything at a gutsy SACS side. A strong North-Westerly wind meant it was a game of two halves, SACS winning the first (8-nil) and Bishops the second (7-6), meaning the hosts won 14-7.

Bishops started well and had SACS under early pressure. With their free running and passing game Bishops were arguably more comfortable playing into the wind and were able to string some good early phase play together. Burly prop JP Smith making inroads and offloading to willing support runners. SACS repelled the early pressure and a late tackle on their flyhalf and captain Jordan Chait allowed him to open the scoring after seven minutes. 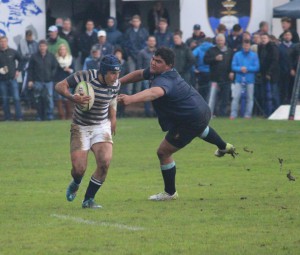 The action was frantic as Bishops counter-attacked and probed the SACS defence. The wind factor eventually told and after a good exit play SACS set up stall in the Bishops quarter for the final ten minutes of the half. Two penalties were kicked to touch and another chance went abegging before on the stroke of halftime SACS worked the ball wide to right-wing Tumi Mogoje who scored in the corner. Chait failed to convert what was a crucial score.

Mogoje was straight back into the action when play resumed. SACS ran the kickoff back and Mogoje went flying down the right only to be dragged down metres short of the Bishops tryline. SACS had a huge overlap to the left and should have scored only for the ball to be spilled with an open line. Bishops came storming back and in what was to be there overriding theme of the half the SACS defence held firm against wave after wave of attack, culminating on this occasion with big prop William Day being held up millimetres short of the line at the end of a great passage of play. 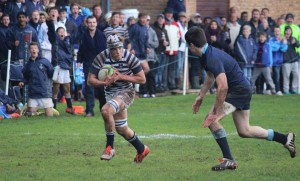 SACS got out of jail and back into the Bishops half where they secured a penalty to go 11-nil up ten minutes into the half. The action moved back and forth as Bishops attacked, SACS defended and then counter-attacked. On one occasion in particular Bishops opened SACS up and themselves had a massive overlap to the left. Unlike SACS who spilled the ball denying them a certain try, Bishops passed the ball in front of the five waiting players and into touch. It was a huge opportunity lost! Twenty-minutes in and against the run of play SACS converted another penalty to go 14-nil ahead.

The final fifteen minutes was all Bishops as on came their playmaker Cornel Smit who had rushed across after his SA Schools match at City Park. It didn’t take long for him to make an impact from a deft grubber left-wing Andre Manuel beat the cover and dotted down. Smit converted and Bishops had their tails up with five minutes to play.

SACS kicked off and Bishops ran the ball back but the SACS defence, which had been heroic all match, once again held firm through to the final whistle, when the SACS crowd swamped their heroes and sang their war-cry. 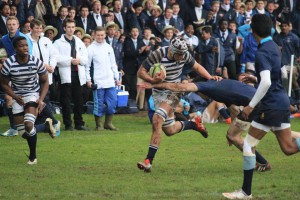 The Bishops lads, who had played themselves to a standstill, returned to their huddle for some sage words for their legendary and long standing coach Andre Jacobs. Jacobs, who came to Bishops after a successful stint as coach of St. Andrew’s College, retires from teaching at the end of this year. A legendary schoolmaster he has been worthy successor to the doyen of Bishops Rugby, Basil Bey. In a fitting gesture, being his last match in charge of Bishops at SACS, the hosts honoured him with a commemorative plaque.