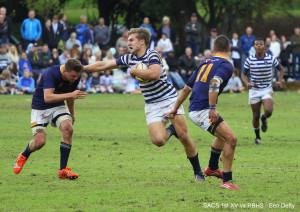 For the second week in a row The South African College High School (SACS) travelled a short distance down the road to one of their traditional Southern Suburb rivals, this time Rondebosch Boys’ High. Once again the hosts were firm favourites, most of their largely Grade 12 team, having never lost a Southern Suburbs derby in their High School careers.  For the second week in a row SACS started slowly conceding an early lead before coming back to win 27-15 (Half-time 10-8). 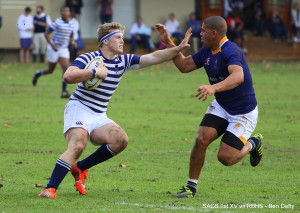 Rondebosch dominated territory and possession from the outset, SACS unable to exit their half. Rondebosch turned down two kickable penalties backing their maul. SACS successfully defended both attempts but Rondebosch continued to apply pressure. SACS were just holding them out until scrumhalf Nic Potgieter dinked a kick over the top of a ruck. The ball bounced, was gathered and offloaded on the tryline to Ryan Klein, playing on the wing this week. Klein scored but Potgieter missed the relatively easy conversion attempt.

Rondebosch came within inches of scoring immediately from the kickoff. They caught the kick and moved it into midfield where speedster Mike Mavovana cut open the SACS defence. He beat a number of defenders before almost miraculously been hauled in a metre from the tryline by SACS fullback Athi Gazi. Rondebosch had the lineout throw and mauled again only to concede a penalty which allowed SACS to eventually move play up towards the halfway line.

It had been all Rondebosch for the first seventeen minutes until SACS received a free kick which they tapped and moved left. No. 8 Alex Halvorsen sliced open the defence and from the ensuing ruck the ball was moved left to wing Thomas Waterkeyn who  stepped inside to score. SACS captain and flyhalf Jordan Chait converted. 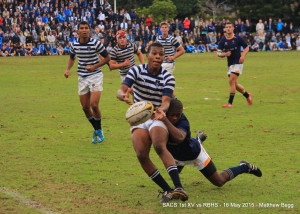 SACS were getting on the wrong side of referee Jonathan Kaplan for repeated infringements, mostly for offside. On 23 minutes the world’s most experienced test referee penalised SACS for the third time in succession and issued a team warning. Potgieter kicked the ensuing penalty and Rondebosch led 8-7.

SACS applied a period of sustained pressure towards the end of the half and also turned down two kickable penalties before eventually taking the points on the stroke of halftime to go in leading 10-8 somewhat against the run of play.

SACS struck a vital blow almost immediately from the second half kickoff. SACS kicked off deep and Rondebosch returned the kick. SACS counter-attacked and launched an up and under which gave the ball back to Rondebosch. Potgieter hacked it back to SACS and Gazi launched another counter-attack. Gazi made massive inroads into the host’s quarter before the ball was flung wide to centre Nick Redelinghuys who switched with wing Tumi Mogoje who scored. Chait converted, 17-8.

Twelve minutes into the second half Mr. Kaplan eventually lost his patience and issued a yellow card to SACS. This seemed to ignite the host’s danger man flank-cum-centre Zain Davids. He began to run hard at SACS and cut them open on a number of occasions. One of his penetrating runs was converted into a well-worked try for fullback Yaseen Jacobs. Davids offloading in the tackle expertly! Potgieter converted and Rondebosch were right back in the game at 17-15 with twelve minutes to go.

Davids was at it again soon after as it looked like Rondebosch may seize the initiative and finish the stronger of the two teams. SACS managed to get out of jail though and back into the Rondebosch half where they were awarded a penalty. Chait kicked it from wide on the right and SACS lead 20-15 with seven minutes to go.

Again Rondebosch came hard desperate for the win. They were all over SACS and looked likely to score but dogged defence again kept them at bay. SACS struck the killer blow thanks to a great steal in a ruck by openside Dylan Hadzigrigoriou. The turnover ball went wide to Mogoje who chipped ahead. He got ahead of the defenders and appeared to dot the ball down. The referee though deemed he had been pushed from behind and awarded a penalty try which was converted by Chait.

SACS held on for the final few minutes to record an epic win against highly-rated opponents. . Their supporters couldn’t believe their heroes had done it again as they swarmed the Rugby A-field to sing the school song and chant the war-cry!