2015 has seen some outstanding rugby and many competitive matches amongst the 4 Southern Suburbs rivals.

In the U16A division, Rondebosch and SACS continued their ding dong battle for supremacy with Rondebosch perhaps shading it narrowly when they secured a draw in their return fixture at SACS. Rondebosch also secured a memorable win against Paul Roos and narrowly lost (by a single point) to both Paarl Gim and Boland Landbou. SACS had a comprehensive victory over Paarl Gim and their games against Boland Landbou and Paul Roos were both close affairs. Perhaps the biggest upset of the season was Bishops beating Rondebosch in a pulsating contest to close off the 2nd term! As always, Wynberg were tough competitors and their double over Bishops was I’m sure the highlight of their season.

In the U15A division, Wynberg and SACS proved to be the teams to beat in 2015. Both secured wins against Paarl Gim and Boland Landbou and in the hotly contested fixtures against one another it ended in a stalemate with SACS victorious at home in the 2nd term and Wynberg reversing that result in the final game of the season. Rondebosch managed to upset SACS up on the ‘Meadows’ fields, ruining a Triple Crown opportunity for SACS in the 2nd term. Bishops solitary win came against Rondebosch in the 2nd term but they will feel aggrieved at not upsetting Wynberg after leading convincingly well into the 2nd half of their return fixture at Bishops.

In the U14A division, Wynberg finished a memorable season as Grand Slam champions! SACS ran them close and also celebrated a successful season boasting wins against Paarl Gim and Boland Landbou on top of doubles against Bishops and Rondebosch. Bishops and Rondebosch both improved as the season progressed and they will no doubt become a force to be reckoned with in the coming years.

7’s rugby is a totally different ball game to traditional 15 a-side rugby union. Expect upsets and for the form sides in each age group to be put under pressure by other teams showcasing their speed and skill.

The hope is that all the boys will represent their schools with pride and that enjoyment and good sportsmanship will at all times prevail.

Make sure you get down to the first ever Barons Volkswagen SACS 7s. 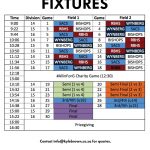