10a match report against Primrose

On a chilling Saturday morning the u10A team were playing Primrose. We lost the toss and were kicking up the field. We instantly made an impact as we scored a well team try. Our scrums and passing was good as we went on to score 3 more tries. The first half ended 24-0 to us. We scored strait from the kick off. They were defending poorly and we took our chance and scored loads of tries. The match ended with a result of 56-0 to SACS. Well played to the team. 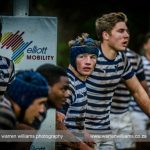