10a match report vs RBPS

On a chilling Saturday morning the nerves were high as the u10 A’s faced a highly skilled Rondebosch team. We lost the toss and were receiving with the sun in our eyes., against the wind.  We were rucking poorly as they scored a try which was not converted. They went on to score another try through a lot of physicality. The whistle blew for half time with the score being 12-0 to Rondebosch. In the second half we pulled ourselves together and broke the line and scoring a try in the corner. We fell asleep and conceded 2 more tries. That was full time ending 19-5 to Rondebosch. Hard luck to the boys. 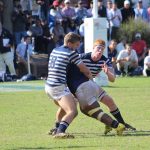