13a match report against Bishops

On Saturday morning we faced a well-drilled Bishops side. The game started off evenly with us kicking off, we applied pressure until we got a turnover and scored a converted try a few phases later. After that we kept on applying pressure until the defence broke and we managed to score two more tries. Half time score 17-0 to SACS.

The second half started a bit sloppy, with them feeding off our mistakes. They managed to score three tries and one was converted .The forwards applied themselves in both the scrums and lineouts, winning turnovers with ease the whole team pulled themselves together and for the last 15 minutes of the game it was in our favour with us scoring two more tries. Full time score 27-17 to SACS.

Well done to the boys on a great game. 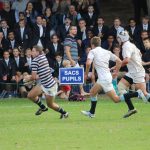