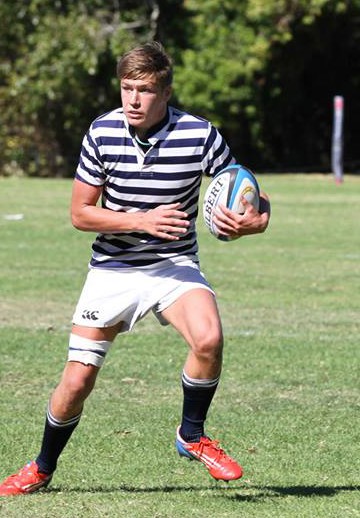 The U16a took the dew off the field today as they kicked off at 8am against Oakdale. Conditions were slippery and the ball was difficult to handle for both teams. SACS took an early 6 – 0 lead through two penalties by Seb Milner. The forwards struggled in the lineouts in the first half and then gave a way a string of penalties by not staying on sides. Before we knew it we were 6-12 down. We missed an early scoring opportunity when Captain Oliver Schuurmans (picture right) could have maybe backed him self to score in the corner, but passed inside only for the ball to be knocked on. But the brilliance came with 6 minutes to go when inside centre Chad van der Loo, back from injury, sliced open the midfield and drew two defenders onto him before off-loading the ball to Jordy Hop who beat three defenders to score under the poles. The conversion was good and we managed to defend brilliantly for the remaining 5 minutes to win 13-12.

SACS come up against a very strong St Johns team on Monday, so will have to work hard to beat this team from Gauteng. SACS U16A results so far: