The SACS 1stXV played two matches at the Wynberg Festival over the Freedom Day long weekend.

In the first match SACS came up against Hugenote from Wellington. It’s never easy facing an unknown quantity and although we stared well we were not able to get away from them until well into the second half. SACS only led 5-0 at the interval after butchering a few try scoring opportunities and maybe trying too hard to score instead of doing the basics well. Hugenote were full value as they harassed SACS on defence and tried manfully to take the game to their opponents.

In the second half SACS went back to basics and were more direct in their approach resulting in some better play and a few more tries.

In the Monday fixture SACS faced St. John’s College from Johannesburg. SACS started well and were 8-nil ahead early on thanks to good use of an overlap to set wing Tumi Mogoje free. Good interplay between flank Liam Larkan and centre Ciaran Dayaram led to a nice try for the latter before skipper Chait crossed himself. Mogoje got his second before the interval to see SACS turn 27-5 to the good. 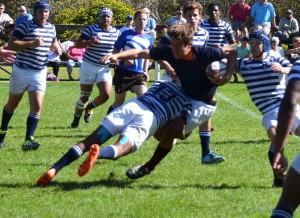 SACS started the second half badly with a flurry of unforced errors and it took them ten minutes to register their first score by Larkan. Scrumhalf Rua-Ees Arendse scored with a neat break and Dayaram got his second late in the game for SACS to run out comfortable winners.

St. Johns scored at the death to finish their festival on a high! SACS would be disappointed at having conceded two tries having set out to finish the festival with no points against. There was some great attacking play by SACS but also some horrible moments which will have to be rectified as we head into the business end of the term with Bishops and Rondebosch (both away) and Paarl Gim (home) looming in the next month. 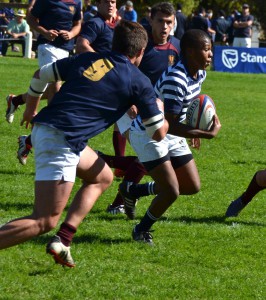