It was with great excitement that we started preparing for the 2022 rugby season. After two Covid years it was so wonderful to be back in training with a full fixture list to look forward to. Having struggled in the few games we played at Under-19 and Under-16 level in 2021, we knew that as a group, we were going to have our work cut out for us.

We managed to start the season with two scrappy wins over Soweto Rugby Club and Durbanville High at the Wynberg Festival. We learned a lot from those matches and flew to Grey High for their festival confident, that if we played to our full potential, we could upset our hosts. Unfortunately, our lineout malfunctioned and our maul defence wasn’t up to scratch and we went down to a big score. We knew we had to bounce back against a highly motivated Queens College team in our second match. We got ahead but made some calamitous errors in the second half to almost throw the game away. Fortunately, we held on for a narrow one-point win.

Back at home we had to travel to Rondebosch for our first league game of the season. Rondebosch had a very good team and the pre-match message was to meet fire-with-fire, but on a warm morning we ran out the tunnel looking flat. We were fortunate that scrumhalf Akha Mjawule had a superb second half to keep the score-line respectable.

At this point in the season we as coaches were very concerned. The team was not improving and we were struggling to come up with the answers. The Easter break proved a welcome respite. In the final practice before the Easter break Mr. Kleynhans introduced a new playing pattern, which seemed to resonate with the boys. We also introduced one or two new personnel who had shone for lower teams against Rondebosch.

Our performance on the farm against Boland Landbou was a revelation. Our lineout worked and for the first time we resembled a rugby team who were playing to a pattern, and knew what they were doing. If it were not for one or two tough calls we may have even snuck a win, but it wasn’t to be. Either way we could get on the plane to East London much more confident of doing well at the Selborne 150th Festival.

Sadly, we didn’t take another step forward in our next match, and produced a below par performance against our hosts. Like on our previous tour we were able to win the second game against Dale College, and get back on the plane to face Bishops with a win under our belts.

Bishops were riding high at that point in the season and we knew we were going to have to play very well to be in with a shout against them. We hung in reasonably well considering we had to send on nine reserves during the match, but Bishops eventually won comfortably.

The next week we hosted Paul Roos for the annual Winters Day derby. This game will haunt us for years to come! They were coming off an epic win against Paarl Gim and were confident. We played really well and had a chance to beat them. A missed conversion in front of the poles and a missed penalty kick to touch were all that stood between us and an historic win. That could really have turned our season around, but again, it wasn’t meant to be.

At this stage we had played ten games and there were still four remaining in the second term. Bodies were getting sore and injuries were beginning to take their toll. We easily dealt with the challenge of Brackenfell but what followed was probably the low point of the season. We had beaten Durbanville earlier in the season and also knowing their aspirations as a rugby school we expected a very tough game. We played with a very strong north wind in the first half but didn’t rack up enough points. In the second half Durbanville camped in our half and scored a try right in the corner on time. Their captain nailed the conversion, from the touchline, in very difficult conditions to send them into raptures.

We had key players out injured for the final two games of the term, Paarl Gim and Wynberg, both away. Try as we might, both games unfortunately got away from us in the second half. After fourteen brutal matches the June/July holiday couldn’t have come at a better time. It had been a tough term with many lessons learned.

After the holiday, with five matches left for the matrics to play, we decided to give the team a little more freedom to express themselves. Back at full strength and seemingly happier at being able to play a bit more rugby the team gelled and produced five rousing performances. The results didn’t always go our way, but the effort and pride shown were heroic at times.

We started by hosting Paarl Boys High the week before the annual Inter-schools clash. We climbed into them and gave them a proper run for their money. They scored tries in injury time, in both halves, to inflate the score however their Headmaster felt that the physical contest we gave them set them up for their unexpected Inter-schools derby win a week later.

The following week we travelled to Milnerton High for the first time in over a decade. It was nice to run in seven tries and set ourselves up for the final three local derbies.

In hosting Rondebosch we produced a superb performance. Down 17-12 with a few minutes left we broke out and looked to be on our way to scoring the winning try. The referee deemed the final pass to be forward and our dreams were shattered. It was a bitter pill to swallow. We were gutted!

The following week we travelled to Bishops. Always a showpiece game in the season the boys once again produced another superb defensive performance, showing huge guts against wave after wave of Bishop’s attack in the dying moments. This was a huge moment for the boys and definitely the season’s highlight. None of the boys in this team had previously won a Southern Suburbs derby in high school and the win gave them a memory they can cherish for the rest of their lives.

The final match of the season was our annual FNB Classic Clash against Wynberg. Carrying on the theme of the term we hung in against our much vaunted opponents. Down 11-5 with under five minutes to play we had a good opportunity to score but didn’t convert. This carried on the theme of the season being that our skills, execution, and decision-making just weren’t good enough in the key moments of games.

Although the results didn’t always go our way, the commitment and fight shown in the final five games of the season left everyone, most importantly our loyal supporters in the stands, proud of this team, and how far they had come collectively over the course of the season.

Seven of the team including captain and loosehead Ali Osman-Bosch were in Grade 11 in 2022. These include the season’s top point scorer flyhalf Raashied Conrad and the two top try scorers, fullback Aya Machuli and wing Ilitha Ntinini (7 tries each). Aya was by far the most improved player of the season and he finished the season with a man-of-the-match performance against Wynberg. The other regular players returning are loose-forwards Daniel Dayaram, Khwezi Ndlovu and Richard Skeeles.

The matrics who formed the backbone of the pack were Chaise Botha, Ryno Loots, Alex Lategan, Nathan Pretorius and Zetio Vilandy. Dylan Anderson was playing great rugby when a shoulder injury unfortunately ended his season. At the back Akha Mjawule, who scored five tries, was inspirational at scrumhalf. His solo try against Paul Roos was one of the season’s highlights. He was ably supported by Thomas Symons, Rayaan Hendricks and Mieka-eel Majal.

Congratulations must go to our captain Ali Osman-Bosch, who was selected for the Western Province Craven Week XV, and Aya Machuli, who was called up to represent the WP Academy Team.

A huge thank you must go to Mr. Ashieq Wise who conditioned the squad in the preseason and coached with me for the entire year. Ashieq is a passionate old boy and a knowledgeable coach who can always be counted on. His effort and commitment to this group was enormous. Mr. Kleynhans looked after the forwards for the first fourteen games and moulded them into a formidable unit. Our scrum, in particular, was a massive strength and we turned over very little ball thanks to his breakdown techniques.

On the medical side we must thank Jude Solomons and Ghaleel Achmat for their work in patching the boys up and being with us on match days. Their support was invaluable. The SACS First Aid staff and ground staff also deserve special thanks. To Mr. Grant, Mr Maurer and Josh Strauss, thanks for your support and counsel.

Lastly a huge thanks to the boys and parents for their effort and support over what was a difficult season. A season that tested us all but which, despite results not always going our way, definitely ended on a high! This was testament to the growth of the individuals in the team both as players and as people. That is after all what it is all about. 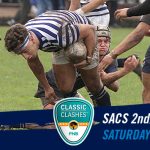 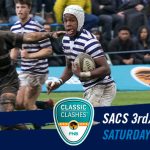