With the midterm break looming, there was a determination amongst the SACS boys to finish the term on a high note, and a good week of practice meant the boys started the game at a good pace. The forwards and backs combined well to force the ball over in the right corner after only 7 minutes, with the conversion from out wide splitting the posts, the first of an impressive kicking display from the SACS scrumhalf. Ten minutes later, a well worked lineout gave the backs the space to send their strong running right wing over in the corner, with the difficult conversion again good.
Perhaps a little taken aback with their lead, SACS then let the Wynberg pack pick and drive over the line, for their first try just before the half time whistle, leaving the score 14 -7 at the break.
A few adjustments by the SACS forwards after the break, with more of them committing to the breakdown, and a dominant scrumming effort, saw more and more quality ball coming the way of the SACS backline, who made good use of it in scoring 3 well worked tries, all of which were converted, before another self-congratulatory lapse in defensive concentration saw Wynberg score, to close the gap to 35 – 12 with a few minutes left to play. But SACS were not finished yet, and with the forwards again providing good ball to their backs, the SACS fullback joined the line and ran through strongly to score under the posts. The try was duly converted, leaving the final score 42 -12 in favour of the home side. 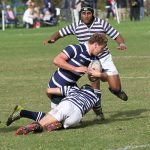