Play started under mild conditions, with a warm south-easter blowing. SACS against the wind, and despite a few last minute disruptions caused by 3 players having played almost the entire game for the 4ths, and another player not turning up at all, SACS defended stoutly against some large forwards, and seemingly, even larger backs.  Eventually the surfeit of possession that Landbou were getting told, and their right wing scored in the corner, after 15 minutes of play. The try was converted out wide, leaving the score 7 -0 to the hosts.

SACS were determined to hold their own, and began to run their own ball with intent, with 8th man Jacobs prominent in gaining valuable metres over the gain line.  Boland Landbou were content to use the wind, and kick the ball back whenever they could. From one such aimless kick,  a fine counter attack  from SACS fullback , Stephens , lead to him offloading to a flying FARR, who despite the attentions of a few Landbou defenders, forced himself over the line, to score close to the corner. The conversion went wide, and at half time the score was 5 – 7 to the hosts.

In the second half, ably led by  8th man Jacobs, the SACS loose forwards were beginning to making their presence felt, keeping the Landbou forwards honest and not able to fan out to run with their backline. As a result, from a scrum in the middle of the field, nippy scrumhalf Van Niekerk, who had an outstanding all round game, went blind, and after drawing the cover defence, put right wing WILSON away for a try in the corner . Again the conversion went wide, leaving the game poised at 10 -7 to SACS.

Stung into action, the Boland Landbou forwards started a series of picks and drives, which lead to an eventual try in the corner from the left wing, with too many tired SACs defenders shoring up the forward drives to defend the outside channels. Again, the conversion was good.

SACS were tiring quickly, with fitness levels suspect amongst some , and  guilty at the restart to give away possession too easily, and spent the next 5 minutes on their line, before a forward drive off a lineout gave Boland their 3rd try, which was also converted.  A series of injuries and changes, and weak lineout, meant SACS were unable to mount another serious attacking move, and spent the last minutes of the game defending their line, before, on the stoke of full time, the Landbou inside centre crashed over, to make the final score 28 -10 to the hosts. 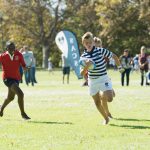