The farmers came to town on Saturday 13 July. Boland Landbou College travelling to The South African College High School (SACS) were they had not won since 2011. Leading 20-3 with fifteen minutes it looked like Boland would comfortably break their duck but a determined fightback by SACS meant it was ultimately a nail biting finish.

Despite SACS lock Enos Ndiao getting close to scoring early on, Boland dominated the first half. Their clever kicking game pinning SACS in their own territory and forcing them to play from deep. Boland came close to scoring on a number of occasions but had to wait until the twenty-sixth minute to open their account. A neat vacuum play from an attacking lineout was well defended by SACS but a few phases later Boland No. 8 Stefan Nortje crashed over leaving the half-time score at 5-nil.

Centre CJ Snyman extended their lead from a penalty early in the second half after SACS strayed offside. SACS managed to get onto the attack and executed a nice lineout variation themselves.  Unfortunately for them a dropped pass and a missed tackle five metres from the Boland line led to a long-range try for the visitors. Speedy wing Tarique Pietersen screaming clear and finishing expertly.

On twenty-minutes SACS were again under huge pressure. They defended their line bravely for a long period but eventually couldn’t stop big loose-head prop Henri van der Westhuizen from scoring. Snyman converted and SACS looked dead in the water!

With ten minutes to play SACS struck back. Flyhalf Nicholas Haasbroek, who had spent most of the match kicking from deep in the pocket, attacked the line. He broke through and offloaded inside to his scrumhalf Alistair Kretzschmar who scored. Haasbroek converted and SACS had belief.

SACS has another attacking scrum soon after but the backs fluffed a good opportunity. SACS were in control now and Ndiao showed good leg-drive in the carry. Flank Nicholas Boden steamed onto his offload and scored under the sticks. Haasbroek again converted and SACS were within three points and threatening to burgle a win like they had done in 2017.

SACS almost did it! Another piece of strong build up play saw them metres from the Boland line. A vital knock-on costing them the chance of an epic come from behind victory. 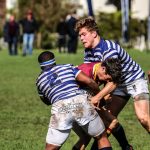