Boland take it away from SACS

BOLAND TAKE IT AWAY FROM SACS

Boland Landbou won a very evenly contested match against the South African College High School (SACS) 28-18 on the farm. The match was played in sunny but mild conditions. Despite playing into the light breeze in the first half Boland dominated both possession and territory.

SACS were unable to exit their half for long periods and eventually paid the price after nineteen minutes when, after losing a lineout close to their line, Boland spread the ball and No. 12 Henlo Marais beat his man to score. Wing Duren Hoffman converted. 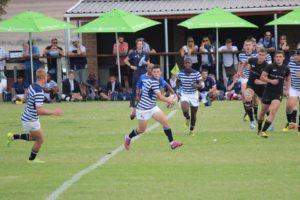 SACS kicked off and were almost immediately awarded a penalty which centre Jordy Hop converted. Two minutes later Hop converted another penalty to make the score 7-6 to the hosts. Hop created SACS’s best opportunity of the half came when after twenty-six minutes he broke from inside the SACS half and with just the fullback to beat he chose to chip when he should maybe have backed himself or his support.

The second half was action packed and full of excitement. SACS started well and ran the ball back from the kickoff into the Boland half. After four minutes they worked No. 8 Alex Halvorsen into space on the left and he ran thirty metres to score in the corner. Hop couldn’t convert.

Boland struck back five minutes later when from a midfield scrum inside the SACS 22m-area their brilliant scrumhalf Deon Carstens got into a gap and timed his pass perfectly to flyhalf Janlu Steenkamp who scored. Hoffman converted and it was 14-11 to the hosts. 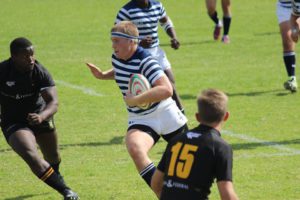 A good counter-attack by SACS saw them back in the strike zone and a well executed move from a scrum saw them put Hop in the clear. He scored and converted to put SACS back in front with twenty minutes to play. SACS were attacking well now and ran the ball back into Boland half from the kick-off. Hop was again the man to break the line and as he reached for the tryline he knocked the ball on. This was probably the key moment in the match for SACS.

In what was to be a theme of the match SACS lost a lineout on the Boland 5m-line minutes later. Boland moved the ball two passes and into the hands of their big centre Henlo Marais. He beat two tackles and ran the length. Two phases later Carstens crashed over under the poles and it was 21-18 to the hosts with twelve minutes to play.

The match ebbed and flowed for the final ten minutes. Boland had their chances as did SACS but finally in the last move of the match Boland scored through flank Heinrich Brendel to make it four converted tries and a morale boosting win for the hosts.