A remarkable second-half turn-around by hosts Rondebosch saw them overcome a seventeen point deficit to beat SACS 29-24 before an enthusiastic crowd at the Tinkie Heyns field on Saturday 18 August 2018.

The old cliché about a game of two halves couldn’t be more appropriate as the hosts battled to find their rhythm against a SACS side keen to throw the ball about in an effort to breach their opponents’ defensive line.

In contrast, despite drawing first blood, Rondebosch seemed determined to make things hard for themselves, even losing a player to a red card in the 23rd minute.

SACS ran the ball at their hosts from the opening kick, shifting play seamlessly from side to side with powerful loosehead Ethan Burger prominent as the spearhead.  When poor handling handed their opponents a scrum, the Young Ikeys promptly stole possession back, setting up influential flyhalf Michael Abrahams for a half-break.

Bosch eventually gathered their wits enough to scramble the ball into touch just outside their 22.  The Newlands side used the line-out ball to spread play to the other touchline, where the move ended with the defence bundling the attackers into touch.

The first of many fine line-out takes by Bosch lock Matt Gray was squandered, allowing SACS to set up an attacking line-out, at which the hosts promptly stole possession back again.

Home flyhalf Conor van Eden, deputising for Ross Stone, who was away on SA Schools waterpolo duty, found touch on the SACS 22 when his side were awarded a penalty at a ruck.

This seemed to galvanise the locals, who produced a great driving maul, which SACS collapsed.  From the five metre line-out set up as a result the forwards drove over the line, hooker Troy Fisher being credited with the try.  Van Eden converted. (Rondebosch 7 SACS 0 – 10 minutes)

SACS upped the pressure from the restart, but found the initial Bosch defensive line in a stingy mood. However, sparkling handling saw the ball quickly recycled to the right, giving SACS outside centre Ben Mazzullo a clear run-in. (Rondebosch 7 SACS 5 – 14 minutes)

The home team seemed to be panicking as they overcooked the restart and nifty footwork by SACS scrumhalf Thurston Cloete, combined with fine interplay with his pack, put the Newlands side back on the attack.

Bosch did manage to carry the ball out of the danger zone, but the relief was short-lived as Mazzullo almost breached the home defence again.  Much to everyone’s surprise, talismanic SACS lock Jean Minnaar then burst clear from a ruck twenty metres out to dot down behind the uprights. Left-wing Matthew Hayes added the conversion. (Rondebosch 7 SACS 14 – 19 minutes)

More imperious line-out work by Gray was cancelled out by a powerful run by Burger, while a pinpoint Cloete grubber ensured that his team remained firmly on the attack.  It was at this juncture that Rondebosch lost a backline player to a red card for a blatant tip tackle.

The Young Ikeys used the penalty to set up an attacking line-out and captain and flank Craig Bylin was on hand to drive over for his side’s third try, which Hayes duly goaled. (Rondebosch 7 SACS 19 – 26 minutes)

When Bosch did try to put together a concerted move, a knock-on saw them concede possession to the visitors, who almost added to their score, Hayes just failing to latch onto a sublime Abrahams grubber.

The stocky flyhalf was pulling the strings effectively, doubling as a first line of defence in front of his backs, and another kick through, followed by typical lightning fast handling by both forwards and backs, resulted in tighthead Josh Barrett scoring as the first half ended. Half-time: Rondebosch 7 SACS 24.

A reinvigorated home team took just over a minute after the change-over to narrow the score, Gray forcing his way over from a ruck near the SACS line.  Van Eden’s conversion was successful. (Rondebosch 14 SACS 24 – 37 minutes)

Rondebosch gained temporary relief with a long clearance from the kick-off, but another slide-rule Abrahams grubber put them back under pressure.

The visitors continued to impress with their confident passing, with Burger again proving a handful for the defenders to deal with.  Bosch were reduced to their earlier panic stations in the face of the Young Ikeys’ expansive running, an aimless clearance not helping their cause at all.

Captain and flank Justin Reynolds led a fine driving move, but Bosch relinquished the advantage when they were caught in possession.

However, deft footwork by their left wing Jonathan Jollivet de Oliveira resulted in an attacking ruck from which Man of the Match no.8 Johann Strauss thundered over.  Van Eden reduced the Newlands side’s lead to just three points. (Rondebosch 21 SACS 24 – 52 minutes)

Suddenly Rondebosch were producing all the enterprising play the crowd had seen up to this point from the visitors and it was from one such move out of defence that the try of the match came, Bosch full-back Dalvon Blood chipping over the defence and gathering to score much to the crowd’s excitement. (Rondebosch 26 SACS 24 – 56 minutes)

SACS’ response was a renewed attacking effort and it took some disciplined defending to keep their right wing Kabelo Mokoena out.

Relishing the challenge, Van Eden cleared his lines coolly, after which his side exploited their guests’ defensive frailty to drive them back well into their own half.

A neat Van Eden chip almost found right wing Daniel Wells, but Bosch were more than happy to settle for a penalty fifteen metres out in front of the posts, which Van Eden stroked over. (Rondebosch 29 SACS 24 – 69 minutes)

Aware that there was only enough time for one last-ditch attempt at salvaging the game, SACS had to endure the heartbreak of knocking on the last clean possession before the final whistle. Final score: Rondebosch 29 SACS 24.

What a pity it is that these two sides waited so late in the season before putting on such an enterprising display.  Had they managed it earlier, local spectators might have seen a far more competitive southern suburbs series.

That said, all those who braved the early morning cold were doubly rewarded with lovely warm weather and some delightful schoolboy rugby. 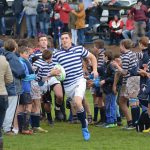