The SACS 1stXV travelled to Durban over the Easter Weekend to participate in the prestigious Kearsney College Easter Rugby Festival. We were warmly greeted and moved into Haley Hostel. The opening function was attended by all the participating schools and the boys were welcomed by the Kearsney Headmaster and addressed by three current Sharks players. 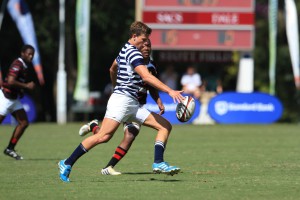 The next day we were up against Dale College. Dale are regulars at this festival and usually perform well. They play a fast paced game and thrive off your mistakes. We started well and won the game in the first twenty minutes. Jordan Chait kicked us into position beautifully and we mauled them over for an early try. We scored again soon after through Liam Larkan and then kicked a penalty to go 15-nil ahead.

The game opened up after that and Dale came into their own but thanks to our good start we held on for a well deserved 22-12 win.

On the Friday it rained. We visited the Gateway Mall for lunch and some of the team tested the wave park. Later that day we trained in preparation for the next match was against AFFIES from Pretoria. 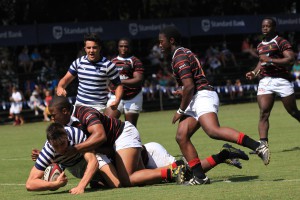 The boys were nervous going into the gamed to against a renowned rugby school with some very big forwards. Crucially though there was a belief within the group that if they played to their ability they could win. This proved vitally important in the latter stages of the match.

The plan was to speed the game up, have a go and move their big pack around. The game didn’t quite pan out that way. We defended for the most part with huge passion. When we did get the ball often we were deep in our half and had defended for multiple phases and we were happy merely to clear our lines. We just hung in there and scrambled on defence, so much so that with two minutes to go the score was 10-6 to AFFIES. 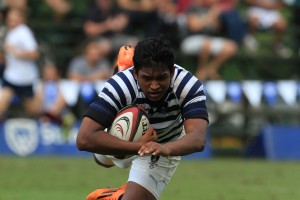 James Brewer made a good carry up the touchline with three AFFIES players on his back. When he went to ground scrumhalf Michael Haasbroek dinked a chip over the top of the ruck which bounced high into the air. Fortunately our tallest back Ciaran Dayaram was chasing. He grabbed the ball out the air and ran forty metres, cutting inside the fullback, the score.

Pandemonium ensued as the SACS player mobbed him! The try was converted. AFFIES strangely chose to kickoff deep. Jordan Chait fielded the ball and hoofed it into touch for SACS to secure a memorable win.

That night the team went to the movies and the following day we went off to UShaka Marine World. It was raining hard when we got back to Kearsney and we trained indoors in their impressive “Sports Zone”.

It was always going to be difficult to prepare for the final game of the tour. Physically the boys were tired after making a huge number of tackles against AFFIES and mentally were probably a little bit pleased with themselves. To make matters worse Westville, our opponents, had lost to Dale on the Saturday who we had beaten. This probably made our boys a little more complacent while making the Westville boys even more motivated. 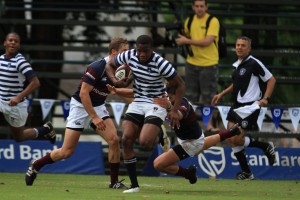 The morning of the game the team appeared in a good space mentally but during the warm-up and in the first few minutes of the game it was immediately evident that we weren’t quite “there” physically and mentally. We started poorly and never really recovered. We put together some good passages of play which led to nice tries for Mathew de Villiers and Tumi Mogoje, which kept us in the game, but we never deserved to win. We made too many basic mistakes and lost 34-26 but learnt valuable lessons about how to mentally prepare for matches.

Overall the tour was a resounding success given the quality of the opposition and the fact that we had only played one full match before arriving at Kearsney. The players learnt a lot and gelled nicely as a team.

Congratulations to Jordan Chait who received a full scholarship to the Sharks Academy at the completion of the festival. Thanks to Mr. Ball for being there and supporting the team and to the parents who made the effort to get up there to support their sons and the team.