Reflecting on all the media hype about the Springboks winning the World Cup, it does give a good feeling reading about the stories where players have fought adversity and come from having very little opportunity to having a World Cup Gold Medal hung around their neck by Sir Bill Beaumont. Beast Mtawarira used to walk to the Sharks rugby practice when he was U20, then upgraded to a bicycle.  Makazole Mapimpi grew up in Tsholomnqa in rural Eastern Cape and lost his mother, sister and brother in various tragedies. He got his break through with the Southern Kings. Siya Kolisi certainly did not think he would be lifting the World Cup Trophy as Captain of the Boks when he asked Schalk Burger for his autograph as a young Grey High School pupil. Hundreds of fans from his home town at Zwide Stadium witnessed the celebration of South Africa winning the World Cup. Oom Cola’s tavern, where Kolisi watched the 2007 World Cup final a few blocks from his family home would not have thought that Siya would become an icon to which many South African’s now look up to.

Below is a photo by GroundUp/Joseph Chirume of Zwide Stadium in Port Elizabeth on the day South African won the Web Ellis trophy for the third time. 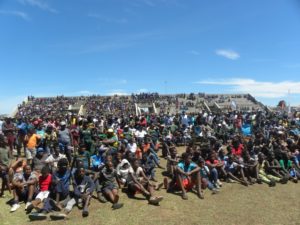 These are just some of the Springboks who were given opportunities and through their own hard work they became great rugby players.

Schools are now affording young talented players opportunities through scholarships to attend their schools. These boys are getting a good education and are able to chase a dream. Yes some will not go further than playing club rugby as the percentages are against them (only about 1 in 35000 rugby players become a Springbok), but they are given an opportunity for a good education. We all know that our education system is in trouble in our informal settlements and rural area towns of  South Africa.

SACS is one of these schools where through various avenues we can assist boys with bursaries. But to be able to do this we need the funding. Hopefully those decision makers at corporate or even individuals who are in a financial position to do so can get involved and partner with us to help change some boys lives for the better. You can read about some of our success stories on our rugby website https://sacsrugby.com/sacs-percy-montgomery-foundation/

If you are able to assist in any way and would like more information about donating towards a bursary program, then please get in touch via email to vanselmb@sacollege.org.za 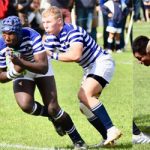