An eleven minute blitz by hosts Paul Roos Gimnasium in which they scored four converted tries saw them get ahead and in the end just stay ahead of visitors, The South African College High School (SACS) in their annual Winters Day fixture. 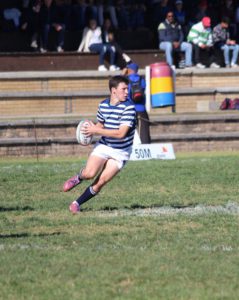 SACS led twelve points to nil up until the twenty-fourth minute but then Paul Roos, sparked by their SA Schools flyhalf Damian Willemse, cut loose and took the match away from the visitors. Willemse was playing out of position at outside centre but his influence and that of fullback Joshua Vermeulen was no less telling.
SACS started well and deservedly took the led after thirteen minutes. Paul Roos overthrew a lineout and the ball was latched onto by SACS flank Liam Larkan who burst through to score. Jordy Hop missed the relatively easy conversion which would prove telling in the final outcome. Nine minutes later it was Larkan who again set up the score. SACS mauled well and as the maul’s momentum was halted Larkan broke off and up the blindside. He flipped the ball to wing Michael Sutton who raced around to score under the poles. Hop was on target this time.
Paul Roos caught SACS napping with a split kickoff and immediately had SACS under pressure. A barnstorming run by lock Ben-Jason Dixon got the hosts on the board and set them up for the assault that in the end won them the match. 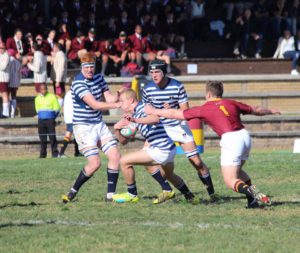 Paul Roos sped the game up and strung together some phases and were able to play to their strengths on the outside. Wing Colia Louis and Vermeulen finishing off two good tries as the hosts moved the ball from coast to coast. SACS kicked off at 21-12 down on the stroke of half time. Willemse and Vermeulen worked some magic up the blindside and two phases later prop Tristan Leitch scored. SACS were behind the poles again wondering what had just happened to the lead they had worked so hard for. Vermeulen banged over three conversions and while he was receiving treatment Willemse nailed one from the corner just to rub salt in the wounds. Halftime and it was 28-12 to the hosts.
The kickers traded penalties early in the second half. Despite being 31-15 behind SACS were putting pressure on the hosts and had three chances to strike within the Paul Roos quarter. They didn’t take them and were to rue those missed opportunities.
Twenty-two minutes into the second half though SACS were rewarded when Larkan tapped a penalty and went over from close range. With thirteen minutes still to go Hop for some reason rushed the conversion and again crucially missed from close range.
Three minutes later SACS were again down in the Paul Roos quarter and flyhalf David Hayes fumbled a ball but re-gathered and cut through the defence and score. Hop converted this time and it was 31-27 to the hosts with ten minutes to play. 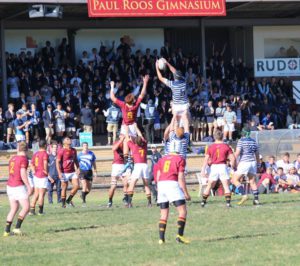 Once again it was the Paul Roos skipper who stepped up when required. Willemse again delivering the killer play. This time creating a try for flank Hanre du Toit to give the hosts and eleven point buffer. SACS weren’t lying down though and hooker Lance Steytler was justly rewarded for a very busy game as he scored with three minutes to play. Hop converted to make it 38-34.
SACS played from their own half almost into the Paul Roos quarter in search of the win but a knock-on saw the game draw to and exciting end. It was a great game of schoolboy rugby. Paul Roos are finished their term of rugby while SACS host archrivals Wynberg Boys High next weekend.
Scorers