The South African College High School (SACS) hosted long standing rivals Diocesan College (Bishops) on a perfect winter’s morning in Newlands. SACS definitely didn’t have things their own way but managed to lead 17-7 at the interval before running out 38-19 winners.

SACS went straight onto the attack with a maul which they didn’t finish off. Centre Nick Redelinghuys broke off the next phase and was held up over the line. Bishops were penalised for offside play and centre Jordy Hop converted to SACS an early lead. Bishops kicked off and SACS, even though they had the breeze at their backs, were unable to get out of their half for the next ten minutes. When they did they made errors and Bishops did what they do best and counter-attacked brilliantly. It was from one of these counter-attacks that Bishops scored to take the lead on eighteen minutes. Wing Tristan Hermans skilfully scooped up a loose ball and raced clear to feed hard working flank Seb Prentice who scored a deserved try under the poles. Scrumhalf Harry Makin converted.

SACS put together some decent phases after the kickoff and received a penalty which Hop kicked against the upright. SACS had an opportunity up the left soon after but the final pass was forward. SACS though continued to pile on the pressure and finished the half strongly. Scrumhalf Lucky Dlepu picked up a ball that popped out the back of a SACS maul and broke through to score. Soon after SACS mauled again and one or two phases later flank Liam Larkan crossed in the corner. Hop converted both tries.

SACS started the half with a thirteen phase passage of play which amounted to nothing. When Bishops got down into SACS territory they pounced on an overthrown lineout and struck with a well worked try for flyhalf Rob Macdonald. Makin converted. Eleven minutes into the half SACS struck again with a try for hooker Lance Steytler after the forwards had laid the platform. On fifteen minutes Bishops ran burly prop JP Smith into the vacuum behind the lineout. He made good yards and a great switch play saw fullback Brandon van der Westhuizen go over and make it 24-19 with just under twenty minutes to play. 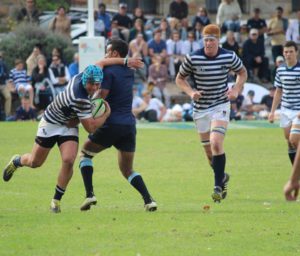 Bishops plied on the pressure smelling blood as SACS continued to make errors. Bishops set up camp on the SACS line and pressed for the lead. SACS had to defend for all they we worth and it looked on a number of occasions as if Bishops had gone over. Unfortunately for Bishops it was not to be.

SACS eventually relieved the pressure and had another relatively easy penalty which Hop missed. They stayed down in the Bishops half though and scored on thirty-two minutes through captain and lock James Brewer. They struck again in the final minute through No. 8 Alex Halvorsen off the back of a five yard scrum. Hop converted both tries to somewhat inflate the scoreline, which flattered them. A gallant and passionate Bishops deserved more on the day.