The South African College High School (SACS) travelled down the road to Diocesan College (Bishops) for another instalment in the oldest schoolboy rugby match in recorded history. Bishops have been in a rich vein of form this season and playing at home they were clear favourites even though SACS have been playing well themselves. Bishops started like a house on fire and led 12-nil after seven minutes, a lead they held until the half time break. SACS had the wind at their backs in the second half and fought back to take a 26-12 lead before Bishops scored again in injury time to make the final score 26-17 to the visitors. 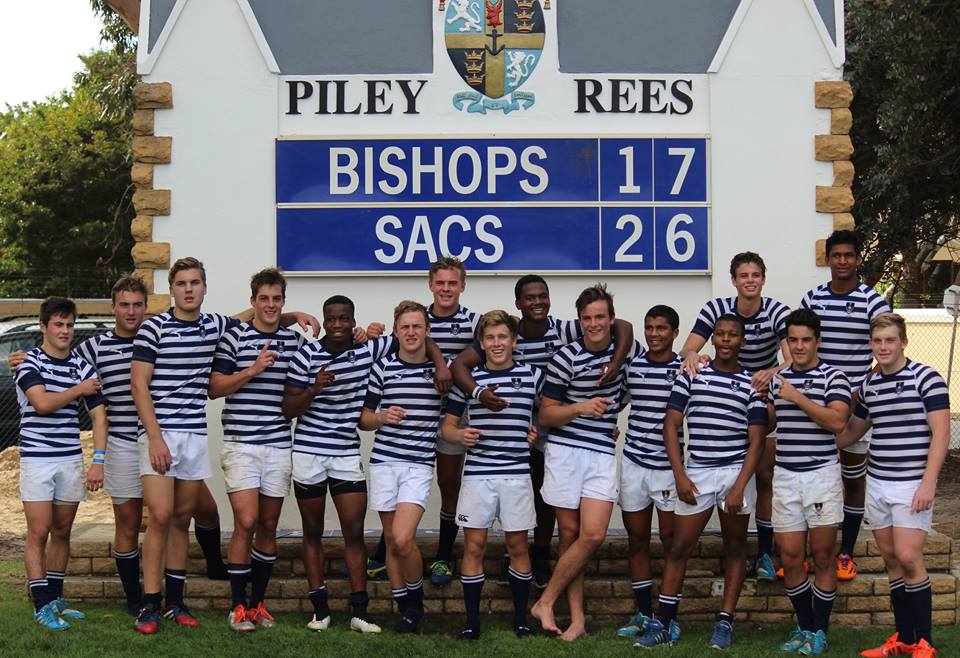 Bishops scored early through their two most lethal players. SACS fluffed a pass inside their half. Burly prop JP Smit scooped up the ball and fed it to Andre Manuel who only knows one way on turnover ball. Tristan Leyds substituting as kicker for the injured Cornel Smit missed the conversion. Leyds made up for it minutes later with a brilliant individual try following an 8-9-15 off a right-hand scrum on the halfway line. He scored under the poles and things looked ominous for SACS.

Bishops looked like scoring again soon after but a try saving tackle by centre Ciaran Dayaram saved the day.  SACS had a prolonged period of attack toward the end of the half but rushed their attack and couldn’t get over the Bishops line.

Crucially SACS scored early on in the second half to give them the necessary confidence to take the game to Bishops. SACS got close with a maul and then swung the ball to flank Liam Larkan who crashed over under the poles. SACS captain and flyhalf Jordan Chait converted. The game ebbed back and forth for the next twenty minutes before SACS hit a purple patch and scored three tries in five minutes.

With Bishops attacking well SACS stole the ball at a ruck wide on the right in their own half. The ball was passed to Dayaram on the blindside and he found himself unmarked. He ran sixty metres to score. Chait converted again to give SACS a 14-12 lead with fifteen minutes to play.

Two minutes later Bishops made a similar mistake to the one SACS made early on. They dropped a pass when attacking from inside their own half. SACS centre Nick Redelinghuys grabbed the ball and drew two defenders before passing inside to lock Tommy Posen who scored. Chait converted, 21-12.

Two minutes later SACS played a lineout ball into midfield. A quick ruck ball was spun left to wing Thomas Waterkeyn who ran clear and cut inside to score. This time Chait missed but at 26-12 with 12 minutes to go Bishops had it all to do.

Bishops ran and ran as is their want but the SACS defence held firm. Bishops were a bit lateral and predictable at times but with the fancy feet of so many of their backs they are always a threat. SACS tackled and tackled until time was up. Into injury time Bishops tapped a penalty close to the SACS line and eventually captain Jarryd Lurie went over.

It was too little too late and the SACS players and supporters celebrated a famous win on the hallowed Piley Rees Field with the traditional war-cry. SACS have the bragging rights until the teams meet again in Newlands in a few months time.