An incredible amount of planning and hard work went into the 2012 season. Planning began in August of 2011 and structures were implemented. These structures have played an integral part of the success of all the rugby teams, but in particular, the 1st XV. Pre-season conditioning was vital for the success of our sides and I think the A-team squads did very well in this area. Steve McIntyre (2007 Springbok Conditioning Coach) worked with a squad of 35 U19 players from September until March. The coaches, parents and players commitment to these pre-season arrangements was highly commendable and I think they can see the fruits of their efforts. SACS sides suffered far less injuries this year due to their conditioning. A lot of this conditioning was done at “Rosedale Active”, but this can only accommodate a squad of about 30 players at a push. We are busy with a drive to move this gym over to the sports hall, so we can accommodate more sportsmen. The Percy Montgomery Foundation (PMF) has been instrumental in driving this project. This gym will accommodate all sporting codes, plus be used for Physical Education during the day.

Another project which the PMF has also been involved with was the “Poleyard House of Pain”, which we built for the conditioning of the younger players in U14 and U15 as they use all their own body weight.

I have condensed results into win/loss ratios and points for and against below.

I have included this graph as it shows how we have improved against our local derby schools. Noteworthy performances against Bishops at home (72%) and RBHS away (68%). SACS has improved steadily against Boland Landbou. The important statistic of this graph with Boland is that it show a marked improvement when we went to play at Boland. Although statistics can give you some information, I think SACS still battles tremendously when we play away games.

SACS had made big strides in improving its rugby, but still has a long way to go to become a force amongst Paarl Boys, Paarl Gym and Paul Roos. I think our 1st XV proved to us that this is indeed possible with the correct work ethic and belief, plus outstanding coaching. The PMF has help fund this coaching, provided equipment and also provide some financial aid to players who would not be able to attend a school like ours without some financial assistance. I disappointing statistic for me is the few amount of Old Boys who contribute towards this Foundation. Less than 10 Old Boys currently donate money monthly towards the Percy Montgomery Foundation. I would like to take this opportunity to thanks those Old Boys who have contributed and the parents and supporters who have also assisted financially.  The Class of 1983 are sponsoring a players boarding fees so that he does not have to travel in from Langa each day. I would particularly like to thank David Kirsch for all his hard work and dedication to this young player.

I would like to take this opportunity to thanks Leon de Villiers and Mike de Villiers for all their many hours of work that the put into this cause. Along with their wives, Kim and Debbie, they have mustered up a group of dedicated parents to help satisfy our coffee urges and hunger pangs on a Saturday morning. I am sure they would value your help next year, so please chat to them next season about getting involved to help raise funds for SACS Rugby.

Planning for next season began at the end of August and we intend stepping it up a notch for 2013. Structures have been reviewed and improved upon. We have done in depth analysis of all the “A” sides to look for weaknesses upon where we can build for the future.  Coaches will be empowered with defensive coaching and attacking plans for the next season. A “Bosberaad” at Rusty Gate Farm in February for the coaches will be an intensive 2 days of “coaching the coaches” and feature all the structures that we have put in place for the 2013 season. A special thanks to Roger Orpen for his ongoing support to SACS Rugby.

A SACS High School Rugby Induction Evening was held in October for all 2013 Grade 8 rugby players, where they were introduced to the SACS Rugby Mission and Vision. The players were also informed of the training schedules and commitment it takes to make it into the U14A rugby team.

Skills training took place in the 4th term with various selected squads. These are vitally important as this is an area of weakness which SACS has been working on for a few seasons now. The involvement of Rowan Belchers from ‘Headstart” has provided the A team’s and their coaches an insight into the benefits of added the mental side to ones planning. We will continue to work with Rowan next year as he brings another dimension to our game and a value-add to our coaches.

SACS is fairly unique in the fact that they have so many teachers involved in rugby. Their contribution to your sons’ rugby on and off the field is often under-valued. I would like to see how many school match the amount of teachers we have involved in the coaching. We are continually empowering the development of our coaches and I cannot thank them enough for their enthusiasm in this regard. 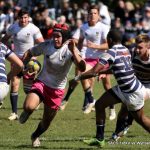