Brackenfell High School came within a whisker of beating Premier A-league rivals the South African College High School (SACS) in Newlands. It was another beautiful winter’s morning in Cape Town, which should have lent itself to champagne rugby but both sides were guilty of far too many errors in a scrappy but exciting encounter won eventually 17-13 by the hosts. 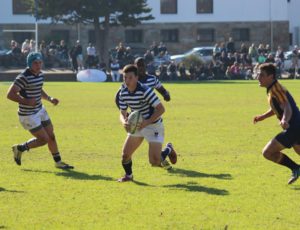 SACS were unable to effectively exit their half from the kickoff and had to soak up early pressure from a fired up Brackenfell team who contested every contact point with vigour. Brackenfell had an early chance to take the lead after SACS collapsed a maul. Scrumhalf Branden de Kock pulled his attempt wide.

Against the run of play SACS scored after sixteen minutes. A couple of phases in the Brackenfell quarter and lock James Brewer found No. 8 Alex Halvorsen unmarked out wide on the left. He waltzed over in the corner but fullback Michael Abrahams was unable to convert.

SACS didn’t kickoff ten metres and were straight back under pressure. Brackenfell taking the game to the opposition and forcing SACS to defend, who in the process SACS were guilty of a number of high tackles. SACS were penalised and received a warning while de Kock made the score 5-3 after twenty minutes.

SACS finished the half the better team as they played in the Brackenfell half and forced a penalty which was missed but then crucially they scored a try on the stroke of halftime. Wing Michael Sutton getting over in the corner to see SACS lead 10-3 at the interval. 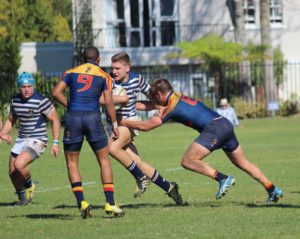 The match ebbed and flowed in the second half as both teams conceded turnovers far too often. Brackenfell loose forwards and hooker Donovan Bouwer took the SACS pack on and dominated for long periods. Bouwer raked four tight-heads and is fast developing a reputation for his lightening quick left foot. From a scrum in the SACS half Brackenfell drew level five minutes into the second half. Stand in flyhalf Keith Chirwara orchestrating a wonderful set piece move which led to a try for fullback Siya Ntuntwana, which de Kock converted.

Four minutes later after SACS had again butchered their kickoff Brackenfell took the lead when de Kock kicked another penalty for a high tackle. Brackenfell were on a roll as SACS continued to concede possession too easily and get on the wrong side of referee Daniel Fortuin. De Kock missed a chance to extend the visitors lead after another period of sustained pressure by a well-drilled Brackenfell side.

When SACS eventually managed to get into the Brackenfell half they built some phases and scored again through flank Liam Larkan. With seventeen minutes to go it was 17-13 to SACS. SACS dominated the middle period of the second half but couldn’t hold on to the ball when it counted. Silly kicks, props being stripped or players isolating themselves meant they were unable to build sustained pressure. Abrahams missed a relatively easy opportunity to make the gap seven points and then for the final five minutes if was all Brackenfell as they surged for the win. 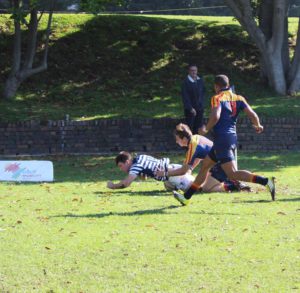 Brackenfell piled on the pressure! They mauled SACS, drove them and carried hard to try and open up space to seal the deal. They threw everything they had at SACS but eventually knocked on five metres from the SACS line. SACS gathered and cleared to touch much to the relief of their players and supporters while the Brackenfell team and coaches were left distraught at so narrowly missing out on the opportunity to topple a Premier A-team at home.

Both teams can improve on aspects of their play but full credit to Brackenfell who showed huge heart. SACS will need that sort of spirit next week as they head out to Paul Roos to take on a wounded Matie while Brackenfell host Stellenberg in a massive Northern Suburbs derby.