10a match report against Bishops

The sun was finally out and about when the u10A’s were warming up at the half time of another match. We lost the toss and were playing down the field kicking. We were playing great and broke the defensive line to score in the corner. We then fell asleep and were wasting chances but held a strong line of defence. They then broke through and scored a try. The half time result was 7-5 to us.

We didn’t fix our mistakes and scored no tries for 20 minutes. In the dying moments Bishops intercepted the ball but luckily Jack’s blistering pace saved the day. We then won the ball and kicked it out for the match to end 7-5 to SACS. 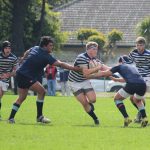