their annual derby fixtures. Bishops led 24-7 at the half-time and won 43 points to 28.

In the first half, somewhat uncharacteristically for a team renowned for running the ball from

everywhere, it was the booming left boot of fullback Brandon van der Westhuizen that allowed the

hosts to pin SACS in the half and build pressure. Using the stiff north-west wind, time and time again

Bishops opened the scoring after six minutes with a Harry Makin penalty. Completely against the run

of play SACS stuck back in the tenth minute. Bishops fumbled an attempted offload and the loose

ball was toed ahead by wing Justin Bendeman who beat the cover to score. Centre Jordy Hop

straight back on the attack. A quick tap penalty and a neat offload and switch and flyhalf James

Macdonald was in under the sticks. Makin did the necessary.

SACS coffin early doors. They chose a scrum near the SACS line and scored after a few phases before

from sixty metres out. Makin converted both a Bishops led 24-7 after twenty-four minutes.

dogged defence meant that crucially they did not score.

right wing Yanga Tolashe who scoreed. SACS went back onto the attack and created another chance

quickly and clinically making it 31-14 ten minutes into the half.

of the hosts. SACS butchered the second kickoff receipt and were immediately under pressure in

their own half. A scrum penalty was kicked to touch by Bishops and from the ensuing lineout they 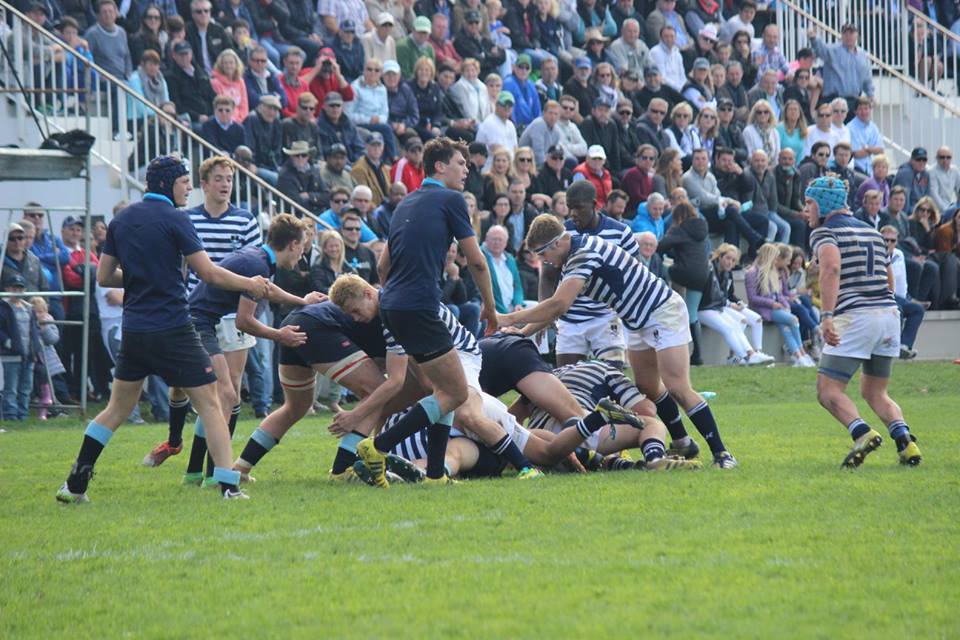 urgency. SACS fired a few shots but Bishops must be commended on the excellent defence. Their

work rate and hunger was clear to see. They capped off a fine performance and a well deserved win

with a try on full time, a classic back-row move ending in a well worked try for centre Rob

Bishops were wonderful on the day and played the conditions well in the first half. They scored some

lovely tries with characteristic offloads and good hard running lines. They will be looking to build on

this performance in search of a dream end to the season. Next week they are away at Wynberg

Boys’ High before hosting arch rivals Rondebosch Boy’s High on the last day of the season.

for one of the showpiece games of their season. Some hard talking will have to be done before SACS

head down to Rondebosch next weekend.