11a match report against RBPS

Our game against Bosch started in dramatic fashion with Bosch scoring a try straight from the kick off catching  us completely off guard. The try was converted. This try gave Bosch the momentum and confidence needed to go on and score two more tries in the first half with us trying desperately to defend. Half time score 19/nil to Bosch. At half time Mr. Faure told us to keep the ball amongst the forwards and to slow the game down. This worked well for us and resulted in Cameron Drummond-Hay scoring a try which Oliver Finley converted. We continued to keep the ball in hand and definitely had most of the possession in the second half however we always fell just short of scoring. Final score 19-7. Let’s aim to end the season on a good note against Wynberg. 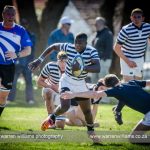