13a match report against RBPS

It was a very warm day on Saturday. We were playing at Rondebosch and arrived early to support other teams before we played. The B and C teams did very well and beat Bosch.

We started with some untidy play and had to tighten up our game and earn the right to go wide.

After about 15 minutes Travis made a great run, off a set move and scored under the posts.

Then Philip de Nobrega fought for the line and scored again.

Robbie Baynham converted this one too.

We went in at half time 14-0 up. Mr Marshall told us we had a scruffy half and needed to pick the game up if we were going to have a chance against Wynberg next week.

Our second half flowed better and we scored four more times.

Oliver Walton soon scored a try on the left wing which went unconverted.

Sechelange Chibale had a burst of pace and scored a great try.

Then Robbie Baynham scored, again on the left wing.

Nabeel scored the final try which was converted.  Final score was 36-0 Well done to the boys for another great win. Looking forward to playing Wynberg this weekend. 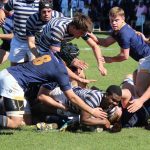