Rondebosch Boys’ High accounted for The South African College High School (SACS) by 22 points to eighteen (Halftime 17-5) on the latter’s home turf in Newlands on an unseasonally hot morning.

Rondebosch got off to a flying start and led 14-nil after seven minutes. In a closely fought derby of this nature which was always going to come down to one or two key moments it was virtually game over then already. SACS fought back to 22-18 with five minutes remaining and threw everything at Rondebosch. Rondebosch held firm and took a well deserved win.

SACS kicked off directly into touch at the start of the game. Were immediately penalised at the scrum and allowed Bosch to launch their best attacking weapon, apart from the burly Zain David’s, namely their maul. Bosch did not score but battered away at the SACS line for multiple phases before captain and No. 8 Liam Greenhaigh forced his way over. Wing Yaseen Jacobs converted. 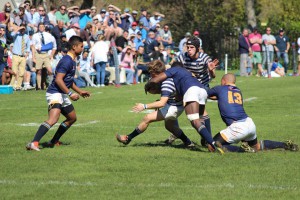 From the kickoff David’s cut loose ripping the SACS defence to shreds with a characteristic barnstorming run. His offload was knocked –on but at the ensuing scrum Rondebosch took a tighthead and launched another attack. A few phases later centre Rory Thomson chipped over the defence where the ball bounced perfectly for wing Ryan Klein to gather and canter over. Jacobs did the necessary.

SACS were forced to throw everything at Bosch from then on and this led to an exciting open game of rugby. SACS ran the ball back at Bosch and after getting close they continued to apply pressure and were awarded a penalty which they tapped and ran. A phase later prop Sihle Lonzi dived over the ruck to score. The conversion was missed.

Both teams had further good opportunities later in the half. SACS made two good breaks as did Rondebosch. Both teams had relatively easy penalty kicks at goal but only Bosch were successful leaving the score at 17-5 when the teams took a well deserved break from the action.

SACS applied huge pressure after the interval and were rewarded twelve minutes in when centre Ciaran Dayaram dotted down.  The conversion was again missed. SACS ran the kickoff back at immediately had Bosch under pressure again. Six minutes after their try they converted a penalty to make the score 17-13 with seventeen minutes to go.

SACS ran the kickoff back but knocked on. A brilliant scrum play by Rondebosch got them in the SACS quarter where they were awarded a penalty. They kicked to touch and mauled for the line. Rondebosch were unsuccessful the first time but received another penalty and Bosch repeated the medicine. This time they got over and again it was Greenhaigh who dotted down. Jacobs missed the conversion leaving the score at 22-13 with twelve minutes to play.

SACS came straight back on the attack. Centre Nick Redelinghuys starting the move with a good break and then finally many phases later tapping a penalty and playing right-wing Tumi Mogoje who burst over to score. Again the conversion was missed and SACS had five minutes to score against a tiring Rondebosch defence.

SACS threw the kitchen sink at Rondebosch but Bosch held firm in a frantic final few minutes. It was an exciting end to a great game of rugby thoroughly enjoyed by a large crowd.

Rondebosch finish their season next week against Bishops at Rondebosch while SACS travel over the hill to old foe Wynberg for what will be Wynberg Headmaster Keith Richardson’s last home derby before he retires at the end of the year.