11b match report vs Kirstenhof

It was an early start. The sun had not risen yet and it was cold on the Van Zyl field. We were nervous as we understood the Kirstenhof A side was strong. They had a lot of reserves and coaches.

We lost the toss and Kirstenhof kicked off to us. For the first 10 minutes or so most of the play was mid-field. Their Flyhalf Kicked over our backline into our half and their wing nearly scored. We defended well and played back into their 22 thanks to some strong attacking play by our centres, supported nicely by our loose forwards ensuring we were first at the breakdowns. At the next set scrum, I called “magic’, one of our favourite moves, whilst on their 22 metre line and Ross Van Breda went over in the corner. This move has worked so well for us in the past and we were once again rewarded by this thanks to our coach, Mr Chibale. Callum Anderson slotted a perfect kick to make the score 7-0. This was the eventual half time score.

In the second half Mathew Hay scored in the corner after some hard work by all the forwards. They came back with a try shortly afterwards which was converted. All we had to do now was defend for the victory which we did successfully.

Well played to Nathan Pretorius on his debut. 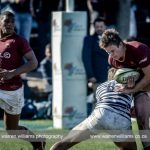