We lost the toss and Wetpups chose to kick off to us. The field was wet and the ball was slippery.

We stayed in their half for a long time and were eventually rewarded with a try.  Wetpups then scored just before the half time whistle making it 5-5 at the close of the first half. At half time our coach, Mr Chibale, told us we could do better in the second half and that was exactly what we went out to do.

We ran in another 3 tries and ensured our defence was solid to avoid any points to the opposition. When the final whistle was blown the final score was 22 – 5 to SACS.

No individual mentions to be made as all us on the day played superbly as a team, 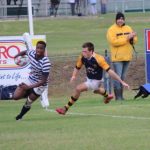