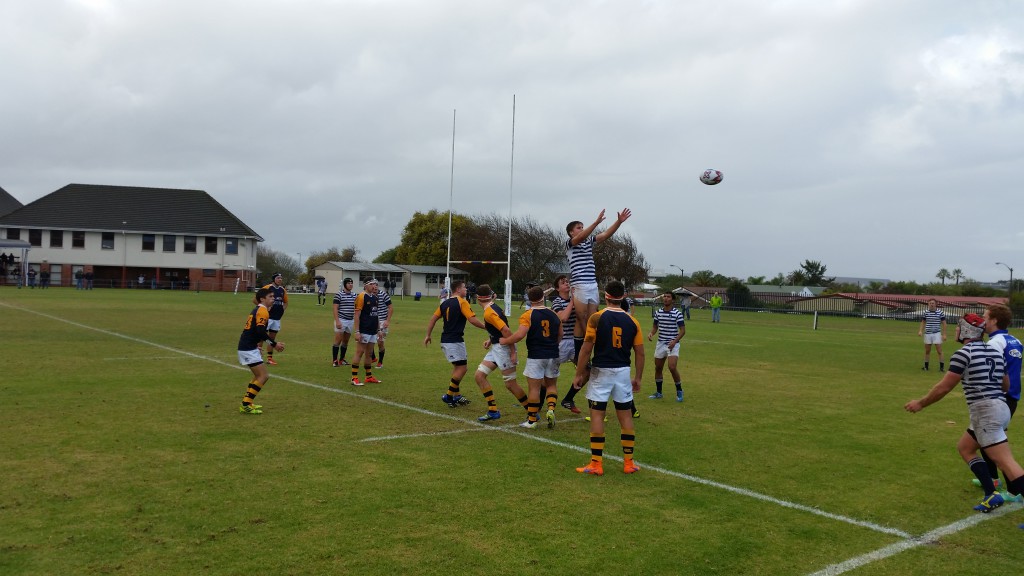 Despite numerous handling errors, not all of which could be put down to the conditions underfoot, SACS still managed to run in six tries to finish comfortable 34-10 winners against hosts Durbanville 34-10 on Saturday 30 May 2015.

Fortunately the intermittent drizzle which fell throughout the morning stopped for the duration of what turned out to be quite an attractive match.  Nevertheless, the visitors’ backline seemed a little out of sorts, although much of their hesitancy could be attributed to fiery tackling by the home defence.

The Young Ikeys set out their stall from the outset, flyhalf Jordan Chait finding a good relieving touch from the deep kick-off.  Having turned possession over, they ran the ball out of defence, only a poor pass causing the promising movement to break down.

Unfazed, the Newlands side gained possession from a ruck to send right wing Tumi Mogoje on a penetrating run, which was only halted some ten metres from the home team’s tryline.  Overzealousness in the resultant loose play saw SACS penalized, enabling Durbies full-back Emce van der Walt to bring his team some relief.

The next SACS player to ask questions of the defence was energetic full-back Athi Gazi, who dodged his way through several attempted tackles.

The first attempt at goal followed soon afterwards when a SACS tackler was deemed to have played the ball illegally.  While the attempt at goal was unsuccessful, the hosts launched a promising attack from the drop-out, only for more poor handling to have the home spectators clutching their heads.

The visitors were finally starting to show their usual backline fluency and outside centre Ciaran Dayaram cut the home defence before running out of support.  By contrast, continued ill-discipline in the loose was costing SACS dearly.

The home team were themselves guilty of poor handling, knocking on a penalty which they opted to run from a promising kicking position.

Although the no.9 couldn’t capitalise on good driving play by his forwards, flank Liam Larkan rescued the situation with a fine pick-up, the ball then finding its way quickly to hooker Lance Steytler, who dived over to get the scoreboard moving. Chait converted. (Durbanville 0 SACS 7 – 18 minutes)

Play was restricted to a brief kicking duel in midfield, a speculative Gazi punt being returned by Durbies’ replacement scrumhalf Christiaan Bothma.

This temporary lull proved short-lived, however, when Larkan drove powerfully to gain thirty metres, the result being a SACS line-out eight metres from their opponents’ line.  After initially being forced onto the back foot, the Newlands side’s pack summoned up a determined driving maul, enabling flank Dylan Hadzigrigoriou to fall over the line.  (Durbanville 0 SACS 12 – 26 minutes)

The visitors appeared to be exerting a measure of control when a fine van der Walt up-and-under saw eighthman Alex Halvorsen drive some thirty metres.  As was so often the case, poor discipline in the loose saw the movement break down.

Another potential three points for the hosts went abegging after SACS were penalised for a swinging arm in retaliation for a perceived late-tackle.

Play quickly switched to the other end of the field, thanks to another surging run by Halvorsen.  When the initial movement broke down, slick interpassing between Dayaram and left wing Thomas Waterkeyn saw Arendse dive over.  Half-time: Durbanville 0 SACS 17.

The Durbies started the second half with renewed vigour, a handling error and enterprising play by the hosts’ pack enabling them to set up a strong attacking platform.  When they were awarded a penalty, van der Walt finally put his team on the scoreboard.  (Durbanville 3 SACS 17 – 39 minutes)

This merely served to spur SACS on again and they drove a rolling maul to within metres of their hosts’ line before conceding a penalty when the ball went to ground.  The Durbanville forwards had also found their second wind and were starting to offer more solid resistance to their lighter opponents.

However, it was the visitors who extended their lead shortly afterwards.  A telling run followed by a precise grubber by Waterkeyn, which the hosts could only hack into touch, put them within striking distance.  Neat interpassing by the forwards from the line-out afforded Man of the Match Steytler the opportunity to crash over for his second five-pointer.  Chait added the conversion. (Durbanville 3 SACS 24 – 54 minutes)

Although Waterkeyn was tackled out on the corner flag barely a minute later, it was the locals who were to score next.

After the Durbies had charged down no fewer than three attempted clearances in quick succession, a great drive by lock Zander Schoeman saw him off-load to tireless flank Rowan Wolmarans, who neatly sidestepped his way over near the posts, giving van der Walt the simplest of conversions. (Durbanville 10 SACS 24 – 59 minutes)

A Chait break ended in heartbreak when he lost the ball in diving over, but unrelenting pressure saw Arendse notch his second try thanks to deft footwork.  (Durbanville 10 SACS 29 – 64 minutes)

Intent on redeeming themselves for earlier profligacy, Graeme Wepener’s lads finished off both their opponents and the game with the try of the match.

Capitalising on a tiring defensive line, Chait broke beautifully to feed Gazi, whose pinpoint pass sent speedster Mogoje over untouched, much to the belated delight of the visiting spectators.  Final score: Durbanville 10 SACS 34.

SACS will look at this as a game of missed opportunities, but then they were looking to restore their self-confidence after the sobering 15-39 home defeat to Paarl Gym last weekend.  Nevertheless, winning ugly trumps losing pretty any day.

The hosts can take much heart from a sound defensive display, especially by the loose trio of Wolmarans, Phillip Jacobs and Pierre Janse van Rensburg, while impressive line-out work ensured their threequarters a fair share of possession.

It was probably a nicer day for playing rugby than for watching it, but that wouldn’t have bothered those brave spectators who ventured out to watch a thoroughly entertaining encounter.