11d match report against 11A Kronendal

On Saturday we played against the Kronendal U11A team at SACS. It was a sunny, but very cold morning. We were all feeling extremely nervous as we knew we were up against strong opposition.

It was even at the start with both teams scoring good tries.  In the second half, we started strongly and scored 2 tries to take the lead.  Unfortunately we missed a few crucial first time tackles to let them in for 3 tries near the end so we lost narrowly by 25 – 17. 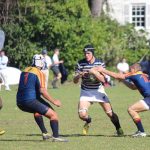