12a match report against Wynberg

With lots of pressure going around the team for playing the main game, we had to perform. For the first 5 minutes of the game  we were camping on their try line.But Wynberg countered and scored and converted. With the score in favour of Wynberg we knew what to do. So we went and scored and converted and then Wynberg scored another one but didn’t convert. Half time score was 7/12 to Wynberg. The second half started with us scoring and converting. Wynberg scored straight after and converted score was 14/19 with 1.30 minutes remaining. We to go and score and convert to lead us to victory. Well done to the team for giving up at any stage in the match. 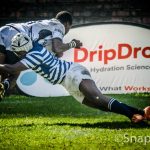