13a match report against Eversdal

Good Morning U13A Rugby report. On Saturday we played Eversdal away. We won the toss and decided to kick. Five minutes into the game we put a good kick into their half causing the fullback to fumble the ball and Camron scored. Unfortunately we failed to convert. After some good forward play both Khewzi and Eddie scored a further two tries which we failed to convert.  Eversdal put in a try and conversion before half time. Half time score 7/15 to SACS.

In the second half Eversdal came back at us hard but our defence stood strong, We managed to turn the ball over inside our 5 meter line on about 3 occasions. We kept the ball tight within the forwards pushing them back into their half and after sustained pressure Rayaan crossed the line and Ollie converted. From then on we dominated play and Michael Sun scored a great team try with minutes to go which Olli converted. Final score 7/29.  Congratulations to the team. 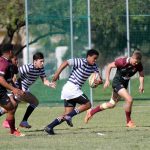