13a match report against Primrose

13A rugby report vs Primrose

Our 1st game of the season was against Primrose on Saturday. We started off well with Matt Hay scoring an early try. Primrose came back at us and scored but did not convert the kick. Immediately we counted with Rayaan Hendricks scoring under the poles with Luke Kritzinger converting.

During the dying seconds of the first half after some good phase play Cameron Drummond Hay scored in the corner.

With good team work we continued with our forward momentum in the second half. Myself, Matthew Hay, and Damian Rowe Davies added a further 3 try’s with Luke converting one. Just before the end of the match Primrose got a lucky interception and scored.

It was a good start to the season however we still have a lot of hard work before our match against Bishops on Saturday. 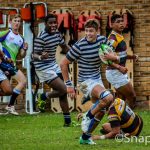