27 May 2017 is a day that will long be remembered by everyone privileged enough to be present at The South African College High School. The day that SACS had waited twenty-one years for, the day SACS gifted the mighty Paarl Gimnasium a nineteen point half-time lead only to come back and score four unanswered second-half tries to win 22-19.

Few would have thought it possible but the SACS coach Nick Maurer was the 1stXV captain and scrumhalf the last time SACS beat Paarl Gim, 8-5 in the rain in Newlands, in 1996. Fittingly the SACS Captain on the day was Vusile “Lucky” Dlepu, who like Maurer also plays scrumhalf.

It must have felt like a good omen for Maurer when he woke up to rain in Newlands on Saturday morning. Not that SACS wanted to play in the rain. Their ball in hand approach is much more suitable to dry conditions. Maurer knew beating Paarl Gim is possible though and that belief was clearly transferred to his players because even when all seemed lost at 19-nil down he told them at half-time that it could be done and would be done!

The rain had cleared by kickoff but match started disasterously for SACS when after receiving the kick-off flyhalf David Hayes’s clearance kick was charged down for Paarl Gim centre Dawid Kellerman to score. Flyhalf Ruben Scholtz converted.

In hindsight this may have been part of the visitors undoing. When you go into a match expecting to win, remember SACS had not beaten Gim for twenty-one years, and then score an early try it can lead to a little bit of complacency. It certainly looked like it when Gim uncharacteristically began to run the ball from within their own quarter with the light breeze at their backs.

As a result SACS had the majority of territory and possession in the first half and created two good chances which they just couldn’t finish. Gim produced good passages of phase play but only got to close to scoring once. Their other two tries coming via an intercept by Kellerman and another charge-down by No. 8 Henco Martins. Martins was their outstanding player for Paarl Gim on the day and made a number of brilliant attacking runs.

SACS needed to score early in the second half to give them and their supports hope. They did so in the third minute when lock Jean Minnaar intercepted a pass on the halfway line. He ran the ball just into the Paarl Gim quarter. A few phases later flank Craig Bylin scored. Centre Jordy Hop missed the conversion. 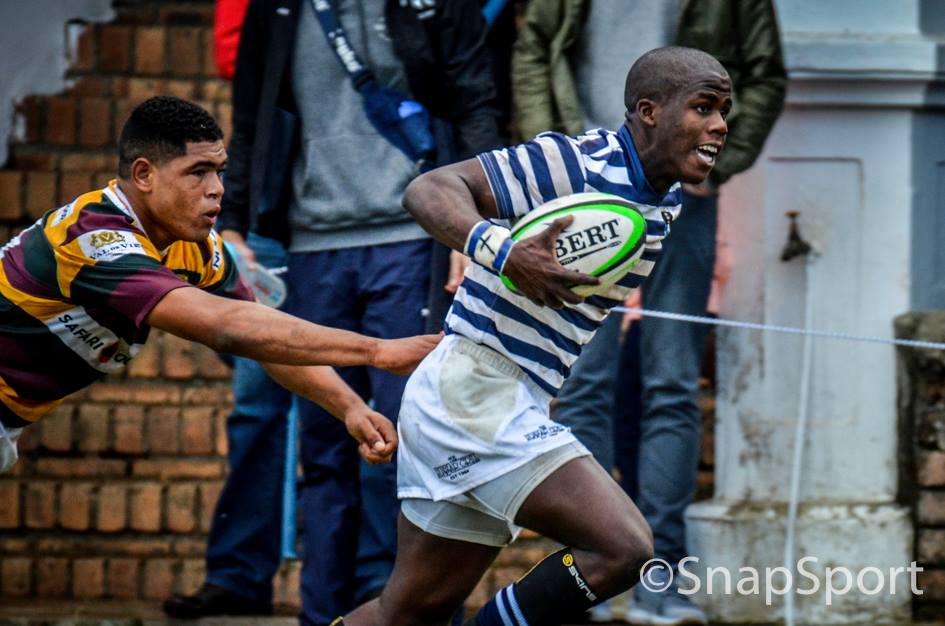 Five minutes later SACS struck again. Dlepu started a counter-attack which was taken on by Hop. The ball went wide to the right and within metres of the Paarl Gim tryline. When the ball came back Dlepu found prop Ethan Burger available and offering to carry. Burger used his size and skill to barge over for another try. The conversion was again missed.

After their second try SACS were guilty of doing what Paarl Gim did in the first half and not clearing their lines. SACS spent the next ten minutes camped in their own quarter and defending furiously. In defence SACS executed a number of “choke” tackles which proved vital in thwarting Paarl Gim’s momentum and in SACS eventually winning the game.

During this period Gim should have closed the game out but crucially they did not. Quite unbelievably they had another charge down opportunity where for some reason the Gim scrumhalf Jean Janse van Rensburg tried to scoop the ball up when all he had to do was apply downward pressure. It was to be a very costly mistake!

SACS managed to eventually escape unscathed and set a lineout on the Paarl Gim 10-metre line. They executed a set play which involved a sequence of pick-and-go’s. It worked a treat and they rumbled 40 metres up field for replacement lock Storm Balchin to score. Fullback Michael Abrahams had now taken over the kicking duties and he also proceeded to miss a relatively easy shot at goal leaving the score at 19-15 with just under fifteen minutes to go.

With eight minutes to go SACS had another lineout on the Gim 10-metre line. They ran another set play which saw No. 8 Oliver Schuurmans drift into space wide on the left. He was brought down but a full ten phases later SACS had asked numerous questions of the Paarl Gim defence but had only progressed onto their opponents 22m-line. The ball went wide to the left to Schuurmans again but this time he only had a loose-head prop in front of him. He glided past him, cut inside and scored under the poles to seal his place in SACS Rugby folklore. The crowd went wild while Gim huddled under the poles listening to instructions as to how they going to come back and win the game. 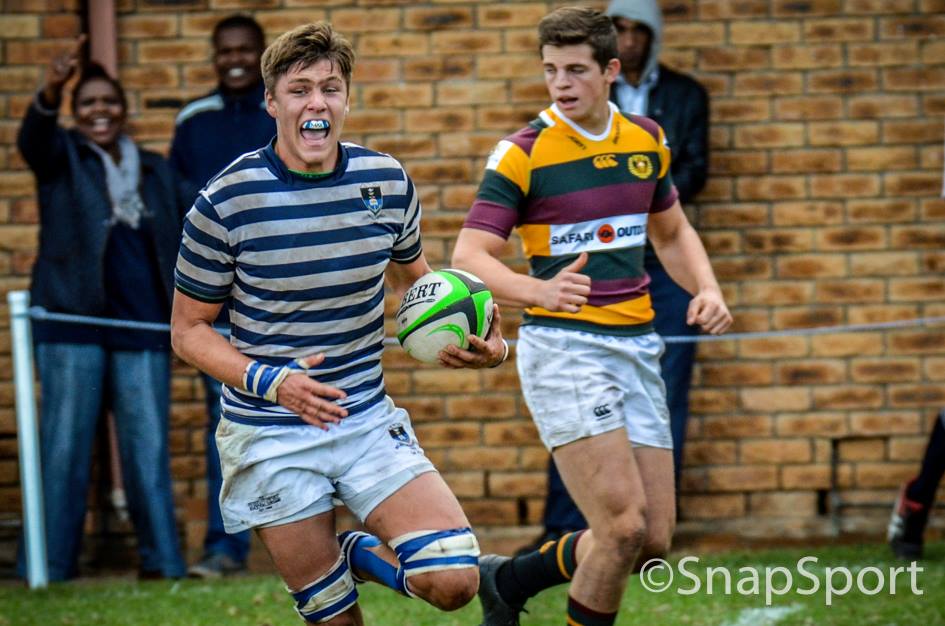 Tellingly for Gim two key personnel watched the game from the sidelines on Saturday. Director of Rugby and 1stXV Coach Pieter Rossouw would have been watching the match on YouTube from Japan where he is on a coaching sabbatical while their captain and SA Schools fullback Muller du Plessis was forced to miss the match with a hamstring injury. How they could have used his speed and skill and his assured leadership now when the chips were down.

Abrahams had converted and Paarl Gim had it all to do with five minutes left. The SACS halfbacks used the wind well in the final quarter and pinned Gim in their won half. Somewhat surprisingly Paarl Gim had sent on a number of substitute players throughout the second half and consequently when chasing the game from deep in their half they looked disjointed and never threatened to score.

SACS closed the match out expertly winding down the clock like seasoned professionals. Captain Dlepu confirming with referee Jonathan Kaplan that time was up before booting the ball into touch to scenes of unbridled joy and emotion. History had been made!