13a match report against Wetpups

On Saturday we played Wetpups. We won the toss and decided to receive. We always knew that this would be a hard game and we attacked from the start resulting in Damien Rowe Davies scoring a try within the last 10 minutes of the first half. Luke Kritzinger.

However, Wetpups came back at us scoring 3 tries with the half time score 7/19 to them.

The second half started positively with Luke Kritzinger scoring a further 2 tries however we lost our concentration in the last 10 minutes allowing Wetpups to run through a further 4 tries all of them were converted.

The final score of 19/54 was not a true reflection of how we played as a team, however it was a disappointing result.

Next week we play away against Durbanville. 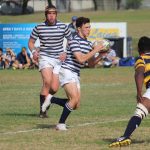