13a match report vs Durbanville

On a chilli Saturday morning we played a well-disciplined Durbanville side. The game started at a high tempo with us scoring in the first 2 minutes. From then on we applied huge amounts of pressure, but their defence held firmly and in the last play of the first half they scored in the corner. Half time score 5-5.

After a stern talk from Mr Marshall and Mr Laros we knew what we had to in the second half. We kicked off and straight away we were on defence. After a few slip tackles we found ourselves on our tryline defending our hearts out, but unfortunately, they scored in the corner. We came right back at them scoring a converted try under the poles. Both teams played full out attacking rugby, but they got through our defence and scored. With 1 minute to go we had an attacking scrum on their 5 meter line, we secured the ball with great scrumming and scored a team try in the corner. Final score 17-15 to us.

Well done to the boys on a suburb team effort to pull the game back. 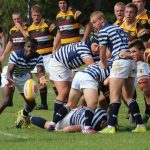