The South African College High School (SACS) emerged with more than their honour intact after giving high-riding Paarl Gimnasium a run for their money on their home turf. After heavy overnight storms the skies in Paarl cleared for the midday kickoff and the match was played in bright sunshine. Gim led 14-3 at halftime. The final score was 17-13 to the hosts.

Gim raced to a fourteen point to three lead inside fourteen minutes and held firm to keep SACS at bay thereafter. Their first try came after seven minutes from a rolling maul. Flank Janus Swart flopping over for Theo Boshoff to convert. 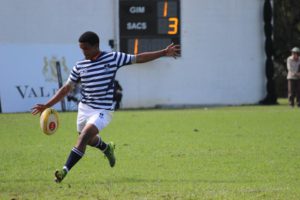 SACS were trying to speed the game up to move the Gim pack around and take them out of their comfort zone. After some good attacking play they were awarded a penalty which centre Jordy Hop converted. Gim kicked off to SACS. Their box kick exit was fielded and from the ensuing ruck Gim spun the ball wide. A few deft offloads later and fullback Wian van Zyl was over in the corner. It was always going to be a long way back from there for the visitors.

SACS went on to the attack again and crucially after a prolonged period of attack came away with nothing before the interval, although judging by the reaction of the crowd behind the poles it appeared that at one stage they had scored.

SACS did score two minutes into the second half. Centre Nick Redelinghuys weaving through the defence to put SACS within four points. Boshoff and Hop traded penalties and it was a four point game again with twenty minutes to play. 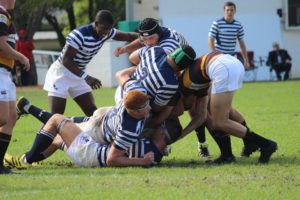 Gim showed their class by pinning SACS in their half for the final quarter of the game and not giving them a chance to go for the win. Unable to get out of their half SACS got frustrated, pushed passes or got penalised and gave Gim a number of opportunities to use their lethal maul to close the game. SACS managed to repel them and the game fittingly ended with SACS trying unsuccessfully to exit their territory.

It was a credible performance by SACS but not good enough to topple one of the top sides in South Africa in 2016. Gim travel to Wildeklawer next weekend while SACS are at the Wynberg Boys’ High 175th Anniversary Festival.