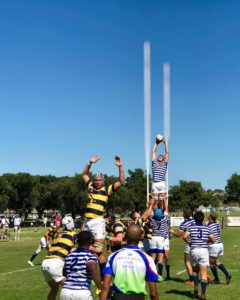 Playing at home, a fired up Durbanville side, outlasted SACS in an impressive display to win 33-24 (halftime: 7-12). Touted by the locals as a derby between the oldest Afrikaans and oldest English schools in South Africa there was a wonderful atmosphere around the ground on a beautiful day in the Northern Suburbs of Cape Town.

Durbanville dominated possession in the opening exchanges, using their big pack to test the SACS defence. Durbanville cut SACS open off a lineout early on but were unable to capitalise on the opportunity. In the twelfth minute and with virtually their first attacking foray SACS came away with a lovely try. A flat cut-out pass putting fullback Duran Koevort into space. He fed flank Ian Paterson who scored. Flyhalf Matthew Hayes converted from out wide.

On twenty-eight minutes van Biljon launched a contestable exit from his own twenty-two metre area. SACS fielded the ball and scrumhalf Stuart Whittingdale nudged a beautifully weighed grubber up the blindside, which sat up for winger Kyle Kreymborg to score.

SACS had a chance to extend their lead after the halftime hooter as prop Peter Choi intercepted. He was hauled down and the ball went wide to the right. A brilliant cover tackle dislodged the ball as the SACS wing dived for the line. From the second half kick-off though SACS immediately made up for that near miss as fullback Koevort launched a brilliant counter-attack to set up Kreymborg for his second try.

From the kickoff SACS tried to run the exit but dropped the ball and were immediately again under pressure. Durbanville worked their way into the SACS twenty-two and received a scrum five metres from the SACS line. No. 8 Ruben Jooste peeled off the base and set up a maul. His forwards joined in and lock Vince van Dyk got over for the try. Van Biljon kicked the conversion but missed a relatively easy penalty a few minutes later which would have drawn the hosts level.

Going into the final quarter of the match SACS scored what seemed like a vital try. Centre Rihaz Fredericks used a turnover ball to cut open the Durbanville defence. He fed Whittingdale on his inside who scored under the poles. Hayes converted to give SACS at 24-14 lead with fifteen minutes to play.

Again from the kick-off SACS chose to run their exit. They had numbers but a delayed and slightly telegraphed pass was intercepted by van Biljon who gleefully trotted in under the sticks. He converted and Durbanville we back within three points and had their tails up.

With the Durbanville crowd urging them on the hosts went for the jugular. A neat pick-and-go through the middle of a ruck launched the attack which saw them take the lead. From the ensuing ruck the backs swung the ball left and a beautifully executed angled run saw centre Xander van der Westhuizen glide over. The conversion was missed but the hosts had a slender two-point lead with less than ten minutes to play.

Durbanville had managed the game well throughout and used the pack to grind down SACS. Their offloading out of contact across all their age-group sides and the 1stXV was a joy to behold and meant their speedy outside backs received a surfeit of front foot ball.

The heat, heavy field and ferocity of the contest saw many players on both sides going down inured and with cramp. When the hosts brought on nippy flyhalf Diagho Miggel you sensed he might just create some magic against a fast fading SACS side.

Miggel duly did the necessary, carving open the SACS defence in the dying moments to set van der Westhuizen up for his second and match winning try. When the final whistle went the hosts and their fans celebrated a hard fought but well deserved win. Durbanville making a clear statement that they are a force to be reckoned with in Western Province schoolboy rugby circles!