One can quickly forget how far SACS Rugby has come in the past 6 years. A man who deserves a huge amount of credit for that success is our outgoing 1st XV head coach, Graeme Wepener. Graeme, or Holla as he is known to his family & friends is a rugby man through and through. His rugby knowledge together with his passion for the game as well as his unflappable nature and wicked sense of humour have been the key ingredients to his successful 6 year stint as head coach of the 1st XV.

SACS Rugby looks back on the highlights and achievements during Graeme’s tenure and pays tribute to the man for everything he has done and accomplished since 2011. 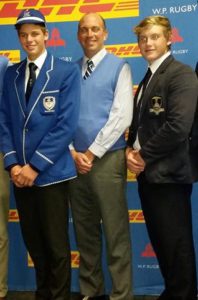 In early 2011, Jeppe Boys High from Johannesburg flew down to play SACS on the Memorial A. A tight match was duly won by SACS and Graeme and his 1st XV were on their way. Despite a few frustratingly close losses to our local rivals in the 2nd term, SACS set off to the bi annual Cape Schools Week in King William’s Town filled with excitement & positivity. What was to follow was one of the great tours of Graeme’s time as head coach. The SACS 1st XV humbled powerful Grey High School from Port Elizabeth 17-0 before comfortably seeing off Muir College 2 days later. The final fixture was to be against the hosts Dale College on their beloved 1st team field in the main game of the day. The Amadoda came out firing but SACS weathered the storm to win 23-16 and record a famous unbeaten tour of the Eastern Cape. As promised, the players duly shaved the heads of the SACS coaching staff (both rugby and cross country) in front of the main pavilion much to the delight of all players and spectators present.  After the euphoria of tour, SACS were still in search of their 1st Premier League win since 2008. In what has become one of the most significant SACS victories of the recent past, the team managed to come back from 0-13 down at halftime against a strong Bishops outfit and win 20-13 with a try in the final play of the game. What that victory meant to SACS Rugby was clear for all to see and it was certainly the spark that would ignite many more special rugby occasions in the future. The final game of the season was played on the Hawthornden field against an exciting Wynberg team featuring players such as Sikhumbuzo Notshe in the starting lineup. SACS once again dug deep and came back from a big deficit at halftime to win 29-26 and end the season on a high. Under Graeme’s guidance, the tide was starting to turn. 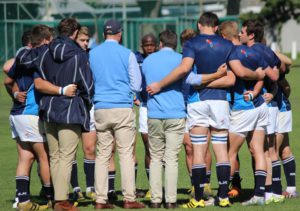 Graeme’s 2012 1st team was blessed with an abundance of talent and began its campaign with a good win against Border powerhouse Selborne College from East London. Later the SACS team would fly to Johannesburg to play Jeppe Boys High in the return fixture after hosting in 2011. SACS held off a determined fightback by the hosts to record another notable ‘tour’ victory. Two more convincing victories were to follow against St Johns & St Stithians also from Johannesburg before the league season began in earnest. In 2012, SACS led at halftime in all clashes against the three Boland heavyweights but sadly fell just short of recording memorable wins over Boishaai, Paarl Gim and Paul Roos. The team then recorded comfortable wins against both Bishops & Rondebosch at home before stepping up to a new level in the 3rd term beating Rondebosch 26-6 on ‘Rugby A’ & Bishops 34-3 on the Piley Rees in commanding performances. Sandwiched into a busy season was an unforgettable unbeaten tour of Zimbabwe in the June/July holidays with convincing wins against Prince Edward, Churchill & St Johns. 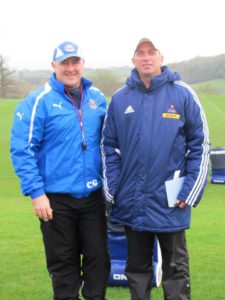 In 2013, SACS continued to dominate schools from our neighbouring countries with victory against a tough Windhoek High School from Namibia to get the season moving. SACS hosted Boland Landbou in the 1st league game of the season and an inspired performance resulted in a massive 26-22 win for the boys in blue & white. Another highlight of a very enjoyable season for Graeme and his coaching staff was a 2nd consecutive double over Bishops with the 22-5 victory on the Piley Rees something to savour. A 5th consecutive victory against Bishops was a remarkable achievement in itself when one considers that between 1990 and 2011 SACS 1st teams recorded only 5 wins in total in all those fixtures both home & away.

Although 2014 was disappointing from a results point of view, Graeme can still look back on good wins against DHS from KZN as well as St Davids & St Stithians from Johannesburg. The team also held out for a home win against Rondebosch in what must be one of the most amazing rear guard actions in SACS Rugby history. Playing away from home SACS led Boland Landbou 17-10 with almost full time on the clock. Landbou scored in the corner in the dying seconds and their Craven Week scrumhalf converted from the corner to draw the game and break SACS hearts.

A very special year was to follow for Graeme and his 2015 team. Considered by many to be in a ‘rebuilding year’, the underrated squad set about their challenges with guts & commitment and surprised the schoolboy rugby community with their exciting attacking play and ‘never say die’ defence. After seeing off Dale College in their opening game of the Kearsney Easter Festival SACS then took on the mighty Affies from Pretoria. What happened next will go down in SACS Rugby folklore and will undoubtedly count as the pinnacle of Graeme’s coaching career at SACS. A depleted SACS team bravely defended their tryline for the majority of the 2nd half and trailed 6-10 with minutes on the clock. From inside the SACS half a speculative box kick was launched which bounced between defenders and into the grateful arms of Ciaran Dayaram who sprinted clear and dived in under the poles for the winning score. A surreal day for SACS Rugby and just reward for Graeme for all the work he had put in over the preceding years. The ‘giant killers’ would then lower the flag of Boland Landbou on Memorial A before beating Rondebosch and Bishops in memorable away victories. Wynberg then fell to SACS in the televised Classic Clash before a solid set of performances at Cape Schools Week saw SACS record wins against Queens College and Muir College with a weakened squad. The team would then record a heroic double against a strong Bishops team and finish the season as one of the most successful 1st XV’s of the modern era. 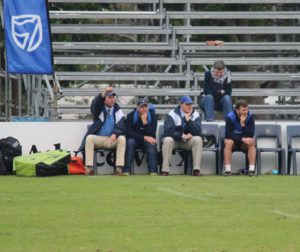 With the 2016 season still fresh in our memories we can look back fondly on the team’s performances against the 4 Boland schools particularly the titanic Boishaai clash. We can also celebrate a win over the famous rugby school from KZN, Maritzburg College as well as convincing victories against Bishops at home and Rondebosch away. 2016 saw the 1st double over Wynberg since 2008 with the final match of the season being a particularly special occasion televised live on Supersport with Hugh Bladen on commentary.