“Is this really a new low” by Nicholas Maurer

Is the rugby public not getting carried away with their constant criticism of the Boks? Do Bok rugby supporters have short memories? Do we have a false perception of how good we actually are as a rugby nation?

Post the euphoria of winning the RWC at home in 1995, the Boks went on to lose 4 test matches against the All Blacks in 1996. It was the year when Sean Fitzpatrick’s men claimed New Zealand’s 1st ever test series win on South African soil. The Boks had players like Os Du Randt, Mark Andrews, Ruben Kruger, Andre Venter, Gary Teichman, Joost Vd Westhuizen, Joel Stransky, James Small & Andre Joubert. World class players of that era.

In 1997 the Boks again lost both their tests against the All Blacks with the same group of players mentioned above plus others like Henry Honiball & Andre Snyman. The Boks also lost the series to the British Lions which shocked the world of rugby and sent a nation into mourning.

Even Nick Mallett’s wonderfully successful 1998 Bok team stumbled against England who were yet to become the great team that would win the RWC in 2003. In fact England during the same year lost 76-0 to Australia under Clive Woodward with Jonny Wilkinson in the No 10 shirt! 1999 was to see the Boks 1st ever loss to Wales which was at the time unthinkable after the Boks had beaten them 96-13 a year earlier!

In 2000 the Boks would lose twice to England and also lose all 3 tests against Australia to go with another predictable away loss to the All Blacks. 2001 saw another loss to England as well as 2 losses to France, one of them at Ellis Park of all places! The Boks also lost both tests to the All Blacks in 2001.

2002/2003 are considered by many to be the Boks darkest days. In 2002 the Boks suffered record losses to England (53-3), Scotland (21-6) and France (30-10) on top of pretty standard losses against the All Blacks. In 2003 the Boks took 50+ points against the All Blacks at Loftus Versfeld! The Boks also exited the RWC in the quarter final stage after the infamous Kamp Staaldraad in the build up to the campaign.

The class of 2006 featuring Bok legends like Os Du Randt, John Smit, Danie Rossouw, Victor Matfield, Juan Smith, Fourie Du Preez, Bryan Habana, Jaque Fourie & Percy Montgomery lost to England, Ireland and France and suffered a shocking 49 – 0 drubbing against Australia in Brisbane! This world class group of players was to form the backbone of the RWC winning team of 2007 but they still lost both tests against the All Blacks in the the same year.

2008 was considered to be a good year for the Boks but they lost 2 tests to New Zealand as well as 2 tests to Australia. Even the Bok dream team of 2009 (who beat the All Blacks 3 times and won the Lions series) lost to Australia, France and Ireland in that year.

In 2010 the Boks would suffer the embarrassment of losing to Scotland, all 3 tests against the All Blacks as well as 2 tests against Australia. In 2011, the Boks arguably fielded their strongest ever RWC squad. Bok legends of the game whose names have been mentioned above plus Jean De Villiers and others. This world class team exited the RWC in the quarter final stage.

Statistically the best Bok results since 1998 belong to Heyneke Meyer’s teams of 2012 and 2013 with only losses to the All Blacks and a single loss to Australia over the two year period. Sadly normal service would resume in 2014 with losses to Wales and Ireland countered only by a 50/50 season against the All Blacks and Australia. In 2015 the Boks suffered losses to Australia, New Zealand & the ever improving Argentina (that would go on and make the semifinals of RWC) in the Rugby Championships before their shock defeat at the hands of Japan at the RWC.

If one critically analyses the Bok fortunes post 1995 RWC you will find that despite a plethora of world class players, some high quality coaches and less political intervention (debatable) the Boks have only managed an approximate 63% win ratio in all fixtures. The Boks have only won 28% of their games vs the All Blacks. It can be argued that beating this current All Black team is far more difficult that it was to beat the All Blacks pre 2011. They are widely regarded as the greatest sports team of any kind on the planet and are nigh unstoppable in 2016. Contrary to what most people think the Boks have also won significantly less than 50% of our games vs Australia over the past 20 years. Throw in fairly regular losses to England and France (prior to 2007) and then sporadic losses to Ireland, Wales, Scotland and now Argentina (not to mention Japan) one might get a clearer picture of the rollercoaster ride that is Bok rugby.

The average Bok fan clearly thinks that the teams of yesteryear never lost a game and that losing on Saturday to a strong Argentinian side away from home is now our darkest hour. I am not suggesting for a second that there are not problems. Of course there are, but this is a new coach, with new players (hardly any of whom are world class), with injuries to key players, who is trying to introduce a new, more attractive style of attacking rugby. The coach also has transformation targets and South Africa also has poorly performing Super Rugby franchises who are the feeder to the Bok team. The Lions being the exception. Add to this the poor SARU structures that exist at various levels and the mass player exodus to the UK, France & Japan.  Nowadays when the Boks win test matches against other top tier nations (and I include Ireland and Argentina in this) we do so against incredible odds in my view.

Is this accepting mediocrity? I don’t think so. If you looking for an example of mediocrity look no further than our national soccer team over the last 20 years. The South African rugby landscape has changed. Bok supporters must accept it and temper their expectations by analysing the facts.

Think about Australia for a minute. They were losing finalists in the 2015 RWC final. They have a coach in Michael Cheika who was named ‘World coach of the year’ last year. They had world class players with plenty of experience up against the All Blacks in Sydney. Guys like Moore, Pocock, Genia, Giteau, Ashley-Cooper & Folau. Cheika can select who he likes – there is no political pressure. They lost 42-8.

To those who say there is no Bok game plan – that is quite frankly a laughable analysis and is a totally misguided assessment. Even the SACS U15d have a game plan. This is International rugby. Is it the correct game plan? That is up for debate. Are the players executing the game plan? Certainly not. A game plan is just a piece of paper unless it’s executed properly by the players on match day. 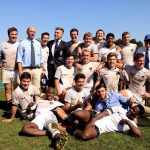