Jordy Hop, from Holland,  joined SACS at the beginning of 2015 after a decision to attend a school in South Africa was made with his parents in 2014. His older brother had attended the Stellenbosch Rugby Academy a few years back and Jordy was keen to further his rugby career in South Africa. Six other boys had chosen Northwood in KZN as their school, but Jordy liked what he saw on the SACS Rugby website and Facebook page and sent an application and video to the Head of Rugby, Barry van Selm, at SACS. Clearly Jordy had the skills to compete for a position in the U16 A for the 2015 season.

Jordy, his brother and parents, arrived just before the year started in 2015 and a nervous Jordy Hop started at Rosedale Hostel. Hostel life was certainly different to the freedom he enjoyed back in Holland. His parents left the weekend after the boarding year started and Jordy had to find his feet in a new school system of uniform, discipline and rules regarding life in the hostel. But he put his mind to achieving his goal of playing for the SACS U16A in 2015 and proving himself in a SACS jersey. He certainly made his mark and was soon recognized as a player who could make an impact. He certainly became a popular member of the team and of SACS. 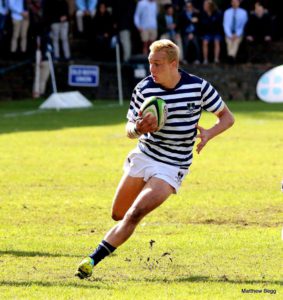 We look forward to seeing Jordy work hard during the pre-season and become a senior member of the 2017 1stXV. He is a player who leads by example on the field.