Coming off two losses Paul Roos Gimnasium came to Newlands to face an old foe in The South African College High School (SACS) desperate to turn their season around. Reduced to 14-men for the final twenty minutes they were forced to dig deep for a hard fought 29-24 victory (Halftime: 17-14)

Paul Roos started well on another warm afternoon in Cape Town. They dominated the first ten minutes of the match but came away with nothing for their efforts. From their first attacking foray from a lineout inside the Paul Roos half SACS scored. Wing Aaron Zeederberg popping up inside his flyhalf and captain on the day David Hayes. He danced through two would-be tacklers before racing over. Fullback Michael Abrahams converted.

Paul Roos struck back almost immediately though. From the kickoff receipt Hayes missed his touch and Paul Roos countered. The ball went right first and then back to the left where some SACS forwards found themselves up against the Paul Roos backs. An overlap was created and left-wing Remy Engelbrecht snuck over in the corner despite a valiant cover tackle from SACS prop Ethan Burger. Fullback Colia Louis converted from the touchline.

SACS missed a penalty attempt midway through the half only for Louis to convert one soon after.  With ten minutes to go in the half SACS were attacking when a Zeederberg chip kick was gathered and Paul Roos started another counter-attack this time from inside their own half. Once again the attack was successful and Engelbrecht raced in for his second try. Louis converted and the visitors led 17-7.

SACS had a kickable penalty on twenty-eight minutes but backed their running game. It looked to be a mistake when they were turned over but crucially on the stroke of halftime they struck. Great hands on the blindside by No. 8 Oliver Schuurmanns opened up space and SACS set a ruck under the Paul Roos poles. Lock Jean Minnaar executed a pick-and-go through the middle of the ruck and crashed over under the poles. Abrahams converted and SACS were back in the game. 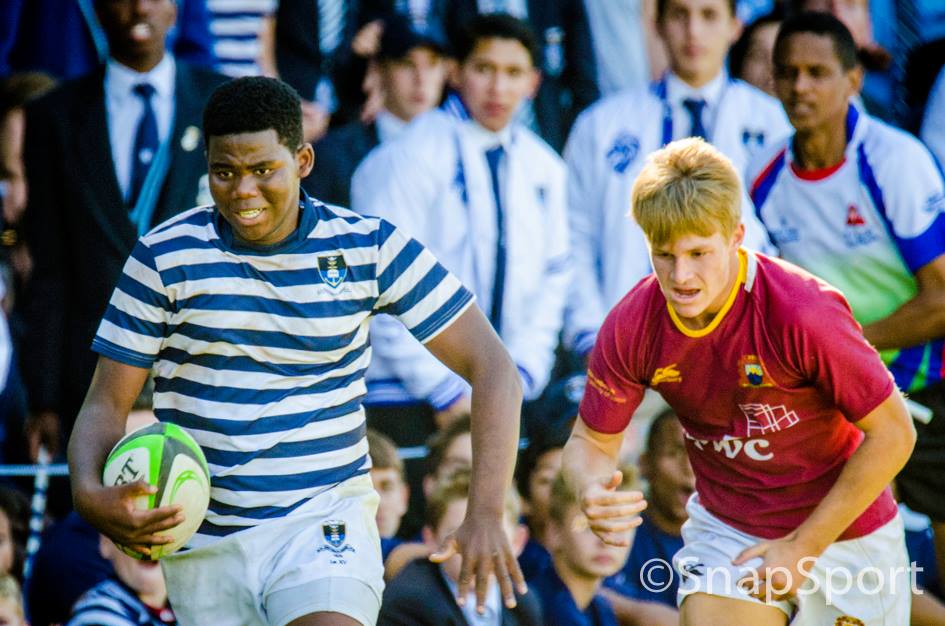 Both teams benefited from intercepts in the second half. Paul Roos first on the board when they intercepted an errant SACS pass on the halfway line. A few phases later lock Breyten Maritz ran a great line to score. The conversion was missed.

SACS went back onto the attack from the kickoff and were rewarded with a penalty leaving the score at 22-17 with 20 minutes to go. It was at this point though where experienced referee Jonathan Kaplan lost patience with what he believed was continued ill-discipline by the visitors at the breakdown. He issued a second yellow followed by a red card to the Paul Roos openside flank reducing them to fourteen men for the final twenty minutes of the game. While the numerical advantage was with SACS as often happens this galvanised an already desperate Paul Roos team.

With fourteen minutes to go Paul Roos scored from a set-phase move from a lineout thirty metres from the SACS tryline. Good interplay between the centres Rufus Dercksen and Brendan Venter saw flyhalf Juan Mostert loop around, cut the line and score. Louis converted and Paul Roos led 29-17 and it seemed like game over until SACS centre Jordy Hop intercepted and raced clear to score setting up a very exciting final ten minutes.

SACS were all over Paul Roos in the closing exchanges but poor option taking on attack coupled with desperate and resolute defence from Paul Roos saw SACS unable to secure the crucial score. The game ended with another breakdown penalty, this time against SACS for holding on. It was an exciting end to an epic encounter between two traditional rivals.