SACS Rugby has embarked on an extensive pre-season program, especially focussed on conditioning. The 1stXV and U16 squads have been under the supervision of 2007 World Cup Strength and conditioning coach, Steve MacIntyre, since September. All squads have had an information evening with parents to plan for 2014.

The U15 squad got together yesterday for their fitness test and were given a holiday program with targets to complete before they are tested in February again.

The U15, U16 and 1stXV squads will be doing a team building morning on 29 November at Camps Bay. The coaches have been appointed and a very exciting year lies ahead for SACS Rugby. 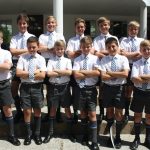