The SACS 1st rugby team finished their season on a high by beating Wynberg in a tough fixture played in beautiful weather on the Hawthornden Field on Saturday. It brought the curtain down on the most successful season for any SACS 1st rugby team since the 1973/74 era.

Highlights of the season:

Beating Boland Landbou, who in 2017 were victorious over the likes of Paarl Gim and Gauteng giants Monnas.

Beating Paarl Gim for the 1st time in 21 years.

An unbeaten Cape Schools Week beating Selborne (who earlier in the season had defeated Grey College from Bloemfontein) and Grey High from PE (who had seen off the likes of Paul Roos in May).

A double over old foes Wynberg with a dominant performance on Supersport in the Classic Clash in June.

A season high ranking of No3 in the country in early August according to Rugby365 / SA Rugby Magazine.

When one considers the youthfulness of the team (up to ten Grade 11 boys started in any given fixture), the tough opposition, only 6 of the 21 games were played at home, SACS doesn’t play a squad system and the lack of a reliable goal kicker, the boys can be justifiably proud of their efforts & results in 2017.

*** The Newlands fixture is excluded from the season stats *** 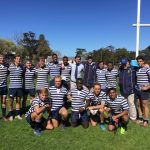