Bare stats are often misleading, particularly when it comes to ranking teams over a whole season. The number of games played as well as the strength of the opposition is not identical for each of the 8 teams so it’s therefore not possible to give a definitive ranking from a whole season point of view.

SACS were the only Southern Suburbs school to beat a Boland school in 2017 (Paarl Gim & Boland Landbou) yet failed to dominate the supposedly easier local fixtures against Rondebosch, Bishops and Wynberg. Rondebosch on the other hand struggled against their Boland counterparts but came up trumps in the Southern Suburbs finishing with 5 wins and a draw in their 6 fixtures. Such is schoolboy rugby!

Without a shadow of a doubt, Boishaai remain top of the pile in 2017. Well done to them on another remarkable season.

For what it’s worth. Here is an overview of season performance for the 8 WP Premier League schools. Be sure also to check out Tony Stoops comprehensive synopsis of the season – http://www.stoopstats.co.za/logs/2017-logs/

In sport, a winning percentage is the fraction of games or matches a team or individual has won. It is defined as wins divided by the total number of matches played (i.e. wins plus draws plus losses). A draw counts as a ½ win. 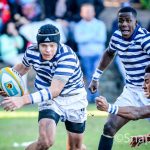