The South African College High School (SACS) hosted old friends form the Northern Suburbs of Cape Town, DF Malan High School, on Freedom Day! It was great to have their long-time coach Bertus Enslin and his colleagues back at SACS on a beautiful morning.

It did not take the SACS team long to properly welcome their guests as within two minutes of the match commencing fiery flank Nick Boden burst through the visitors defence to score. Fullback Matthew Hayes converted.

SACS were in the ascendency throughout and camped in the DF Malan half. Showing great patience in the build-up play their finishing let them down at times and it wasn’t until the eighteenth minute that they scored again. From a scrum close to the DF Malan tryline they ran a simple play which saw centre Kyle Kreymborg score just left of the uprights. Hayes again did the necessary. 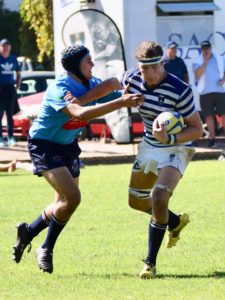 Three minutes later right-wing Duran Koevort scored a wonderful individual try for SACS to take a 21-nil lead. Right on half-time SACS spurned a golden opportunity as Boden went through and his pop past was intercepted. SACS continued to apply pressure though and from a scrum No. 8 Brent van Niekerk broke, was tackled but popped the ball to his captain and lock Jordan Thomas who scored, making it 28-nil to the hosts at the interval.

The second half started off like the first ended with SACS again ruling the roost. SACS ran in three tries in the first thirteen minutes through lock Enos Ndiao, Nick Boden again and van Niekerk. The second try was sparked by the little general Stuart Little, who is a scrumhalf, but pulls the strings at flyhalf for SACS. Much to the home crowds delight he showed great composure to cut open the DF Malan defence and send Boden away for his second try.

DF Malan showed some fighting spirit to hold SACS scoreless for the final twenty minutes. They pulled one try back themselves when burly lock Wian Schwan burst through a weak SACS tackle and cantered in from twenty-five metres out. SACS completed a comfortable 43-5 victory in a match that was played in good spirit though-out.

Next weekend the season starts in earnest for SACS as they host rivals Diocesan College (Bishops) in a match that dates back to 1873, possibly earlier, and is the first recorded schoolboy match played in South Africa. As ever it is a much anticipated derby and a huge crowd is expected. The match will be streamed live by School Sports Live at 12pm for those who are outside of Cape Town.