SACS came back down to earth with a bang against Paarl Gimnasium. Playing at home SACS had high hopes of upsetting the Boland powerhouse but it was not to be as they succumbed 39-15 (Half time 22-3) on an overcast morning in Newlands. The match was evenly poised for twenty-five minutes and despite Gim having territorial advantage thanks to the light north-west breeze SACS actually led 3-nil thanks to a Jordan Chait penalty. 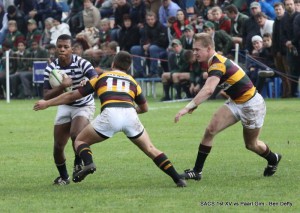 Ten minutes later though Gim had a 22-3 lead which they extended that almost immediately after the interval to all but end the contest. On twenty-five minutes a neat break by Gim flyhalf Wian van Zyl set up a try for his halfback partner Zak Burger. Fullback Naude Wessels converted. SACS kicked off and Gim returned the kick. SACS tried to counter-attack and got isolated. Penalty Gim and it’s a double whammy, 10-3. SACS got the ball back and launched an attack but a knock on allowed Gim back to kick back into the SACS quarter. SACS were pinged for collapsing a maul and when Gim got momentum on their second maul, a shift-maul, the referee awarded a penalty try. From the next kickoff Gim found space on the blind and were straight back onto the attack. Another sequence of mauls ensued but from the second one Burger went blind and found hooker Johann Grobbelaar who just managed sneak over and score. A ten minute master class from a team renowned for their clinical execution and SACS had much to ponder going into the sheds. SACS dominated possession and territory in the second half but five minutes into the half they spun the ball wide and the livewire Keenan Abrahams, who had been a massive thorn in the host’s side in the first half, intercepted and ran eighty metres to score. 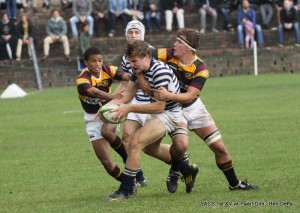 At 29-3 the match was all but over! SACS kept playing though and building phases. From a quick tap penalty scrumhalf Rau-Ees Arendse played his captain into space and Chait crashed over. SACS fluffed the kickoff and Gim went on the attack. A penalty to Wessels extended the visitors lead before a piece of magic by SACS flank Dylan Hadzigrigoriou unleashed winger Tumi Mogoje. Hadzigrigoriou took the inside pass and scored, 32-15. SACS kept attacking but lost shape and struggled to beat a committed Gim defence who were well organised and extremely physical. SACS were pushing the passes and eventually conceded another intercept leading to a try for centre George Lourens. Paarl Gim came to town and showed their class. After slipping up against Bishops earlier in the season they were never going to let a resurgent SACS team show them up and were committed and clinical as you’d expect from a team of their calibre. Job done! Scorers: SACS Tries: Jordan Chait, Dylan Hadzigrigoriou Conversion: Chait Penalty: Chait Paarl Gim Tries: George Lourens, Penalty Try, Johann Grobbelaar, Keenan Abrahams, Zak Burger Conversions: Naude Wessels (4) Penalties: Wessels (2)